There was so mcuh to post I am continuing to post more Axeiversary submissions here a week later.  Today's Guest Episode comes from Hark Stribley (age 29) and Samuel Stribley (age 4):

For those of you who could not be here in Los Angeles on Thursday night, James and John managed to record the audio of our panel discussion/presentation with Malachai and me along with a very livey crowd.  This is definitely a fun listen. There is some spoilers in here though of videos we will be posting later this week, including the Ask Axe Cop episode which comes out on Thursday, so if you are a purist you may want to hold off. 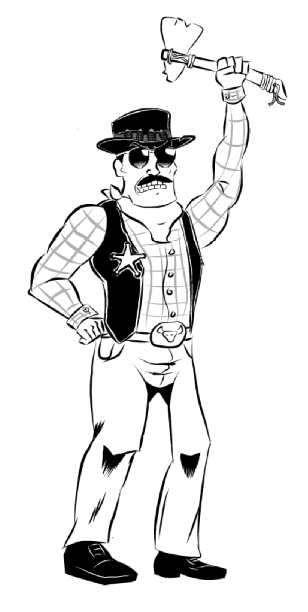 There you have it.  Also, if you have not seen the live action Axe Cop Episode one fan video, you probably haven't been online for a few days because it has spread like the plague.  Go watch it now!!

Another guest episode comes out tomorrow, and Wednesday a new episode of Bat Warthog Man Can't Find His Friend will be released.  It promises to be one of the most controversial and divisive episodes in the history of the comic, so prepare yourself for that.  Thursday, a new Ask Axe Cop episode.  Until then!