note: I meant to post this yesterday, but I was so busy I forgot too!! so, pretend it was posted on the 27th!

It was last year tonight that Obama gave his State of the Union address. I was at Doug TenNapel's house hanging out.  We had just smoked pipe in the back yard as we often do, trading tales of sitting and drawing comics all day.  As the speech carried on Doug was inserting his jabs in like a robot on the Sattelite of Love.  Then my iPod touch started going bonkers.  Suddenly I was getting Ask Axe Cop questions rolling in.  People were adding me on Twitter like crazy.  I get a text from my friend Anthoy who runs the website that the traffic just went crazy.

I get home that night and search “Axe Cop” on twitter to dicover that there are literally between 8-30 new tweets going up every few seconds.  My inbox is filling up as if it is Instant Messaging.  Every time I finish reading an email, my inbox has five new ones.  I am awake until 4 am watching Twitter rage on like a forest fire, and read all the emails coming in.   I finally fall asleep, but wake up about 5 hours later.  My inbox has nother hundred new emails in it… Entertainment Weekly, Wired Magazine, numerous talent  agencies, publshers…  The site crashes that next night becaue traffic has only gotten more insane, so I put the few Axe Cop comics that are up on my own blog while we get a new hosting provider because the one we had could not handle the traffic.  That blog entry goes viral as well as the website.

That was the day Axe Cop took over my life.  It was all thanks to people on web sites like Reddit, Metafilter, Digg, StumbleUpon, Twitter and Facebook that made it happen.  They shared the “holy heckies” out of it as Malachai would say.  Tonight we celebrate a year of Axe Cop at Meltdown Comics in Hollywood.  It looks like it is going to be a huge event.  Malachai is taking his first plane ride ever.  My Dad, his first since 1985.  My family doesn't travel much.

And it's also my Mom's Birthday.  I love you mom!!

I look forward to tonight and wish every faithful headchopper could be there.  I seriously want to say thanks for sharing Axe Cop with your friends and helping to be part of the tidal wave that made this year so much fun.

Today's Guest Episode comes from Jonathan Playmaker, made in MS Paint but also with a whole lot of love.

Also, here is a piece of fan art by a 5 year old fan named Asha: 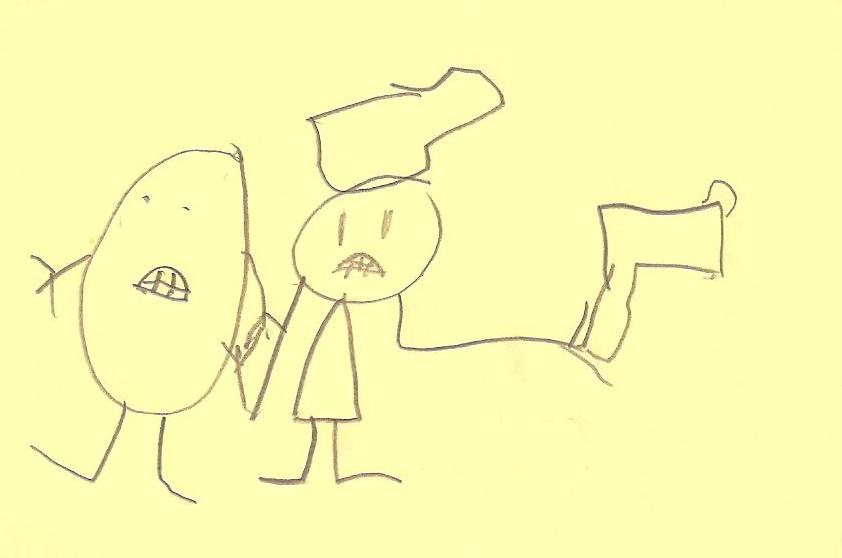 Yes I do believe Axe Cop has a dress on, but I do appreciate the lemon slice on the axe.

Oh, also, one of the most in depth interviews involving both Malachai and myself went up at Newarama yesterday.  To quote Malachai “[as a robot] I-am-going-to-destroy-you.”  He managed to catch me while I was visiting Malachai for Christmas so we talked to him on Skype for a while.  Malachai was pretty hyper.  Also, Sequential Tart gives Axe Cop Volume One a 10!

Well, keep your eyes on the Twitter feed and the Facebook page.  We are going to attempt to live stream the event tonight.  If we do, it should start at 8pm pacific time.  If you live anywhere near Los Angeles I hope to see you there!