It may turn out that I loved the conversation that spawned this episode even more than the episode itself, but this may end up being one of Malachai's favorite episodes because it involves one of his favorite things: pranks.  Now, he doesn't play pranks of people much, if ever, as far as I know.  But when we play he LOVES pretending to play pranks.  We actually have an alternate play time from Axe Cop where we pretend to be two little chinchilla creatures with fist-tails who literally do nothing but prank their sister while she is trying to sleep.  Malachai gets a real kick out of it, but so far it has not yielded anything worthy of an actual story.  He will be excited to finally see some of our prank play times drawn out.  Of course since this is Axe Cop playing pranks, the pranks are generally murdering bad guys.

As I mentioned, Hot Topic has decided to carry this Axe Cop shirt design.  It's very pretty: 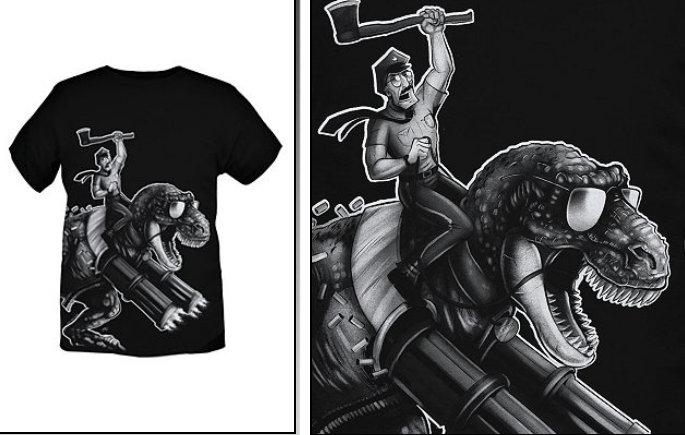 People say “you've made it!  You're at Hot Topic!”  not exactly.  This is Hot Topic taking a chance to see how Axe Cop sells.  So if this shirt does well, then maybe you can say that.  For those of you who complain about the kind of stuff that HT sells, well, all I can say is buy only Axe Cop stuff from them.  I'm sure if they sell enough Axe Cop merch they'll change their name to CHOP TOPIC.

It's been announced that the AXE COP PANEL at San Diego Comic Con is going to be on Sunday, July 24 at 10:00am.  Kevin Murphy of MST3K (Tom Servo) and Riff Trax will be moderating the panel.  We will have guests from Steve Jackson games there to give some sneak peaks of the Axe Cop munchkin game and I'll be giving you some looks at other upcoming Axe Cop stuff.  Malachai will be there and we will do a Q&A which is always fun.  I will also be on a panel on Thursday called Join the 2D Animation Revolution with Doug TenNapel, Dave Gibbons & Skottie Young.

Comic Con will be crazy.  Malachai will be signing for specific blocks of time.  I'll post more information on that as the con gets closer.