This leaves us open for Axe Cop to go back in time and go on an adventure with Club Cop, which I like.  I like that Club Cop has the same problem with normal cops in his time.  They don’t take him seriously because he doesn’t do things the way they do.

It is worth mentioning that Tom Started a Facebook Axe Cop contest to promote Revenge on Rainbow Girl.  Prizes include getting to be in Axe Cop, a drawing by me, some rare screen prints and more.

A couple friend of Axe Cop have some projects worth checking out.  Matthew Sargent, who has worked on Bearmageddon as a color flatter, and on some color flatting on Axe Cop as well as a guest episode is doing the graphic novel for a project called the Incident.

Steven Wesley Guiles, who has done some Axe Cop songs, including the one we used for an Ask Axe Cop motion comic is doing a Kickstarter for an album of original songs about Minecraft.

That’s all I got!

This has been a popular question and it was about time we look at what Axe Land really looks like.  This easily could have been an entire book.  Malachai was ready to map out a theme park that could cover a planet.  I think we get the idea here though… you just add axes and dinosaurs to old theme park favorites like Splash Mountain and the Jurassic Park ride (which already had dinosaurs, so you make them into mummies too).

I don’t think my wife generally keeps up to date on my posts, so I am going to take a chance here and post this link to an original piece by Doug TenNapel and me of Axe Cop teaming up with Earthworm Jim.  I want to use the money from this to put towards her birthday present.  It will help me be able to buy her something a little more spendy if I don’t pull money directly out of our checking account.  The use of bonus funds alone will be a gift to her, as she is very frugal, which is one of the many great things about her. 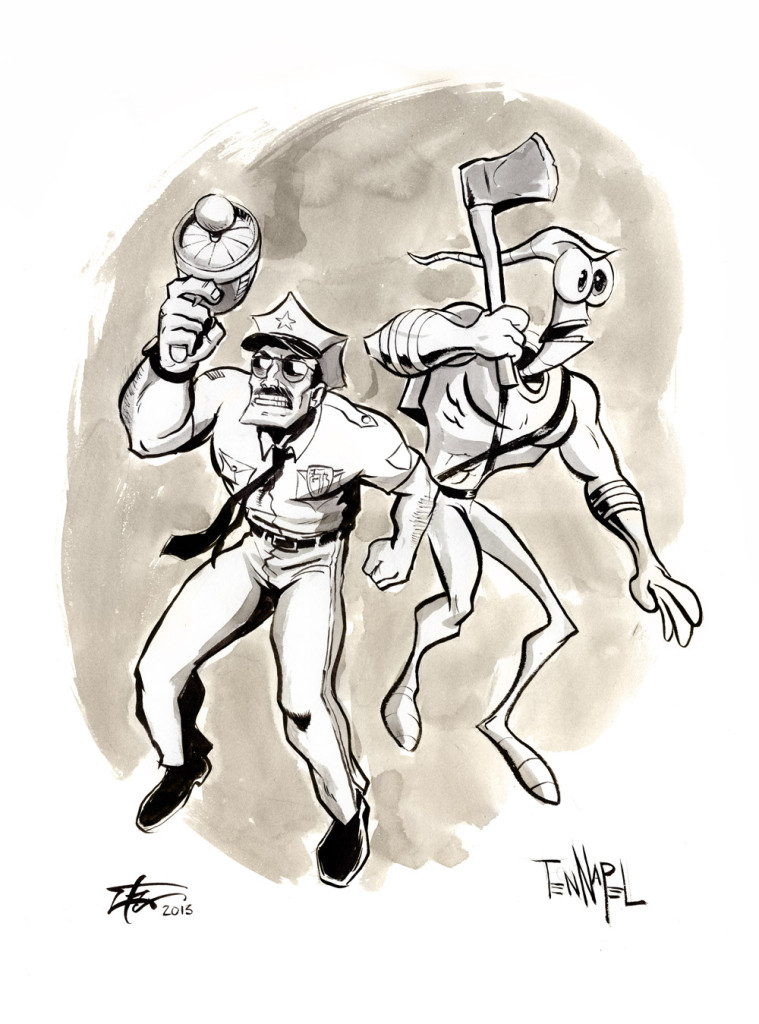 I sold 100 of these as prints with a bit of color added.  This is the actual original drawing by Doug and me.  As far as I know, this is the only drawing we have ever drawn together.