So I missed last RecomMonday because I was in Norway, and I am posting this one a bit late because I am pretty busy and forgot, but here it is, and it is a passionate recommendation indeed…  I recommend:

I know that a lot of you already know about Rifftrax, but I feel I really should make sure that those of you who do not, or who have thought about checking it out but haven't… do, because they make my life so much better.


Rifftrax is the work of three of my man crushes: Mike Nelson, Kevin Murphy and Bill Corbett 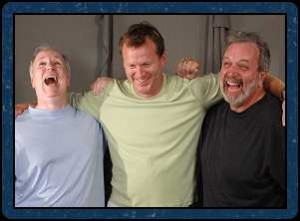 You may recognize them from one of the greatest comedy TV series of all time, Mystery Science Theater 3000.  I loved MST3K and continue to watch it obsessively to this day.  A few years ago I saw Mike Nelson at San Diego Comic Con promoting this new Rifftrax thing, so I checked it out.  I wasn't sure if it would be as cool as MST3K, but in a lot of ways it is better.  Sure, the robots are gone, the theme song isn't as catchy, but RIfftrax solves the real problem with MST3K and that is that Rifftrax enables the greatest movie mockery on earth to now be expanded to every movie in existence.  Sure we loved all those old cheesy movies the guys mocked on MST3K, but we always fantasized about what kind of witty lines they might interject over a movie like Twilight, Transformers, or High School Musical.  Well… it's done, it's here.  They did it.

Basically, Rifftrax sells you an mp3 and they explain in very simple steps how to sync your mp3 up with any movie they have done a track for.  The only drawback about RIfftrax is that the guys are not infinite and can not do every movie in existence- but they have built up quite a library.

Getting some friends together for a RIfftrax party is one of the most fun experiences there is.  Any time my brothers and I get together (excluding Malachai, he doesn't really get the jokes yet) we watch at least one Rifftrax.  I have even watched them with my Dad and sisters.  My sisters especially enjoyed Twilight and High School Musical.

For beginners I recommend the first Twilight movie as an introduction, it's a great gateway into the world of Rifftrax.  The other great thing about Rifftrax is that they keep the humor fairly clean.  I'd say the jokes are generally from G to PG-13 rated.  These guys really do have their own brand of humor, and their own little niche they have created over the years.  They have become real experts at talking during a film.


I used to cringe every time I saw a preview for a new terrible movie coming out… like Transformers or pretty much any of the comic book films.  But now I rejoice because I know Rifftrax will be there to make them some of the most enjoyable experiences of my life.  Rifftrax does the world a hug service by taking something once obnoxious and refining it into pure golden joy.

Also, the RIfftrax guys are huge Axe Cop supporters and they even reference Axe Cop in their riff of Clash of the Titans and X-men Last Stand, which is thrilling for me as a huge geek for whatever these guys do.  Kevin Murphy moderated the Axe Cop panel at San Diego Comic Con and wrote the Foreword for Axe Cop volume 1.

So that's my RecomMonday.  Rifftrax.  Go and enjoy yourself, you have a lot of laughing to do if you have not given it a chance yet.