We presented these moments at the Axeiversary Party in Los Angeles, but I wanted to put the official list here, and also mention a few moments I thought deserved it.  One amazing thing about Axe Cop is that there really isn't a consensus on the best moments.  It was very widespread and the ones that made it in the top ten were by no means unanimous.  The fact is, there are a lot of moments that a lot of people like, and it seems like we all have our favorite.  When I look at my favorite moments from the last year I look at the most pivotal moments that had the biggest effect on the comic, not just the funniest.  So, I will present them from 10th to 1st, and after I'll share some of the moments I picked that didn't make the list and why I think they should have.

I also feel like I should say up front that I write this stuff as a proud older brother.  None of this is to pat myself of on back.  I have watched this stuff unfold with as much excitement as any reader has.  I get the privilege of packaging it and presenting it, and that is a big job, but the substance of where the story goes never ceased to amaze me, and this whole endeavor has been totally fascinating to me.  I hope you do not read this list as self-aggrandizing, I feel like though I am on the creative side of Axe Cop, my unique position enables me to also be a big fan and not look too cocky.  Hopefully.

Hint: All of the images below can be clicked and enlarged and would make great desktop wallpapers.  Also… TONS of spoilers below.

(voted on by the fans)

#10:  We Should Put These Heads on a Stick and Hide Bombs in Them 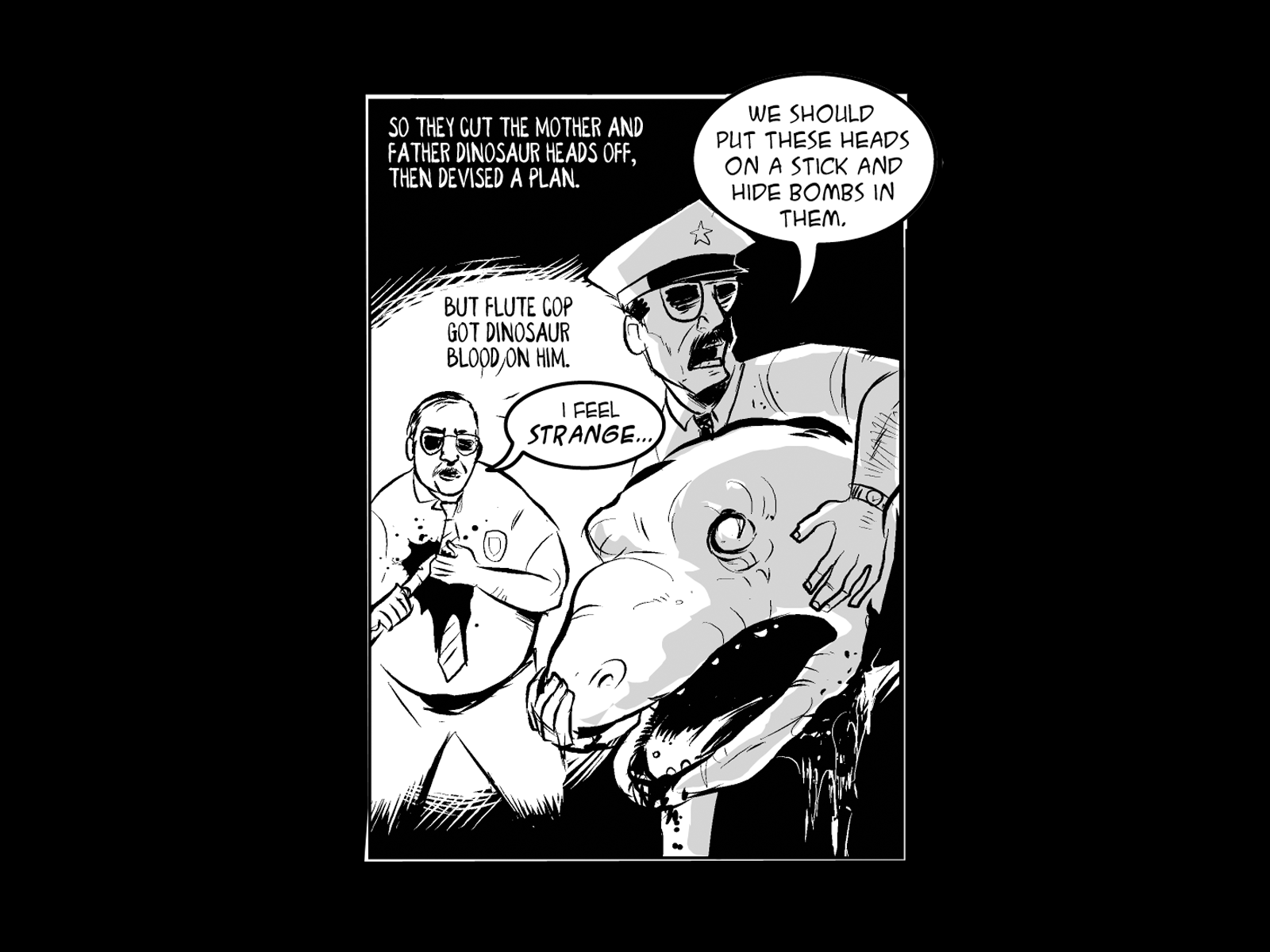 I actually picked this moment as my number one.  Not because it is the funniest moment in the entire series, but because it was, to me, the moment we really found out who Axe Cop is.  He's crazy.  Most of the time when you read Axe Cop episode One this moment gets the biggest laugh.  To me, this is the moment that defines Axe Cop and once you read this line you know what you are in for… something totally insane and unpredictable. 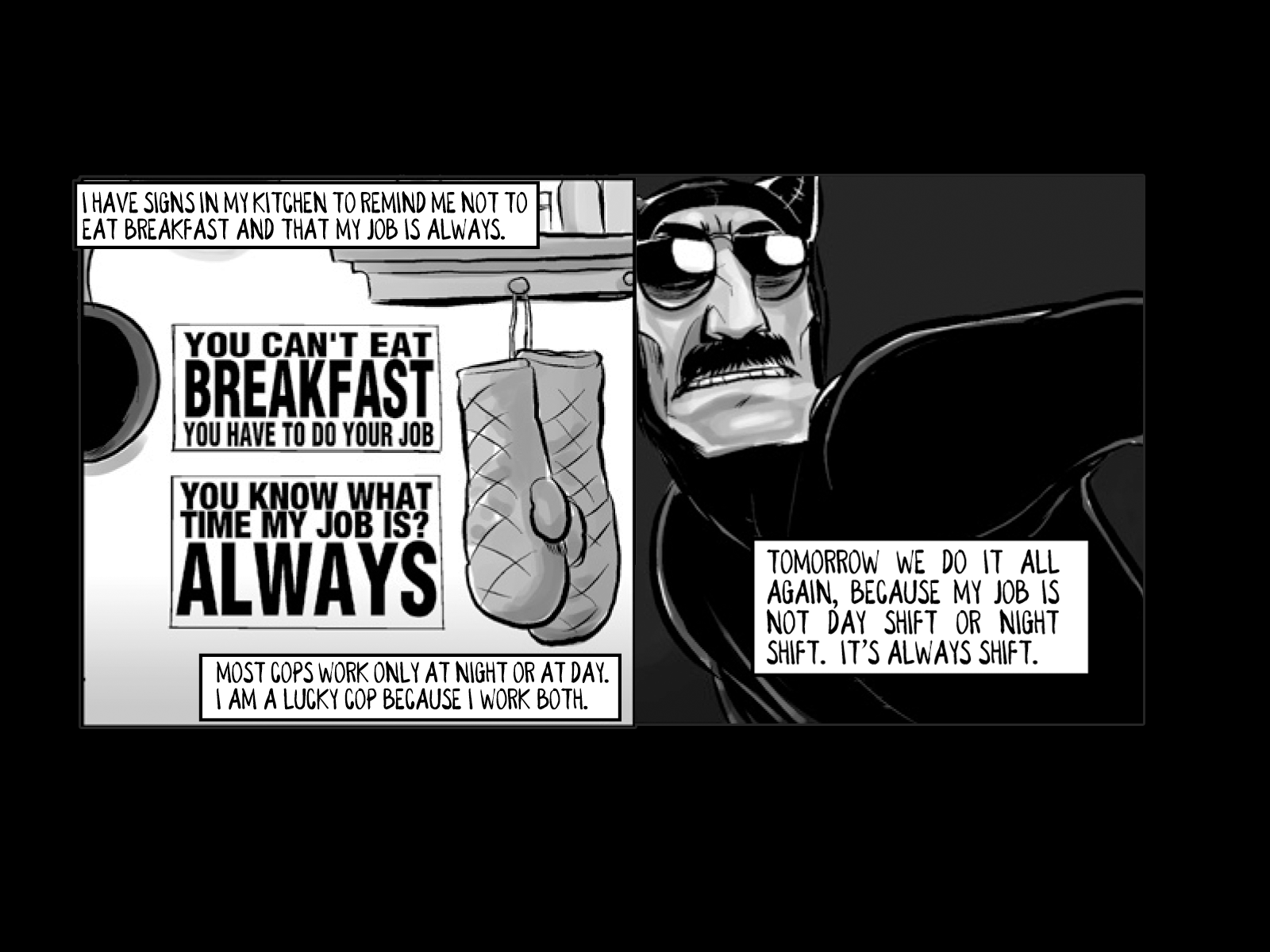 This has been a favorite Axe Cop quote from the beginning.  It's another example of Axe Cop's extreme commitment to his work.  I love that Malachai decided that Axe Cop actually hangs motivational posters in his kitchen. 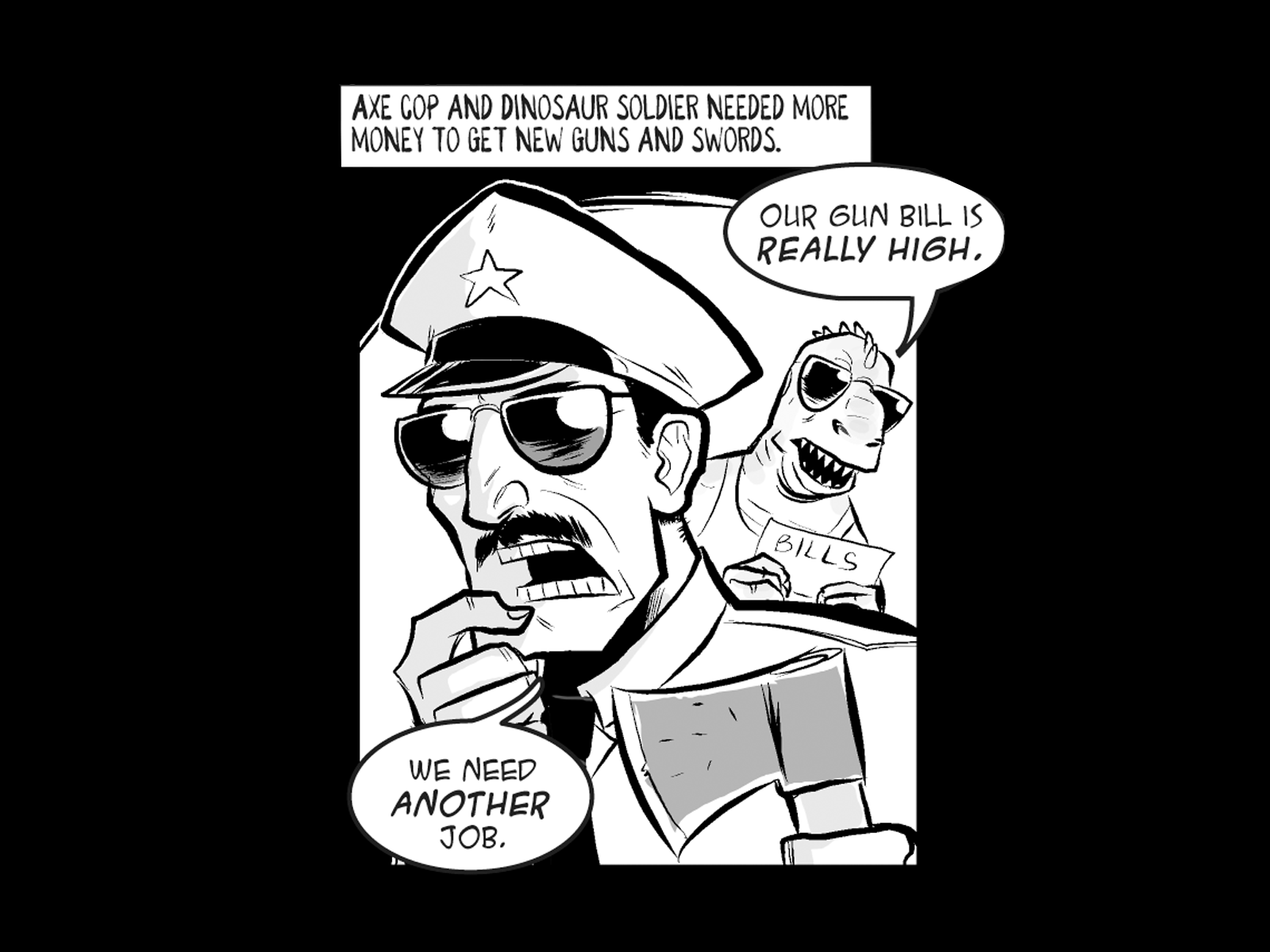 Most of the great moments of Axe Cop come from a conversation with Malachai where I am asking him questions.  He says they get a job, I ask where.  He says fruit stand, I ask why.  He says they need money, I say what for?  I tell him most people have to pay bills of some sort.  What bills do Axe Cop and dinosaur soldier pay?  He says they have a high gun bill. 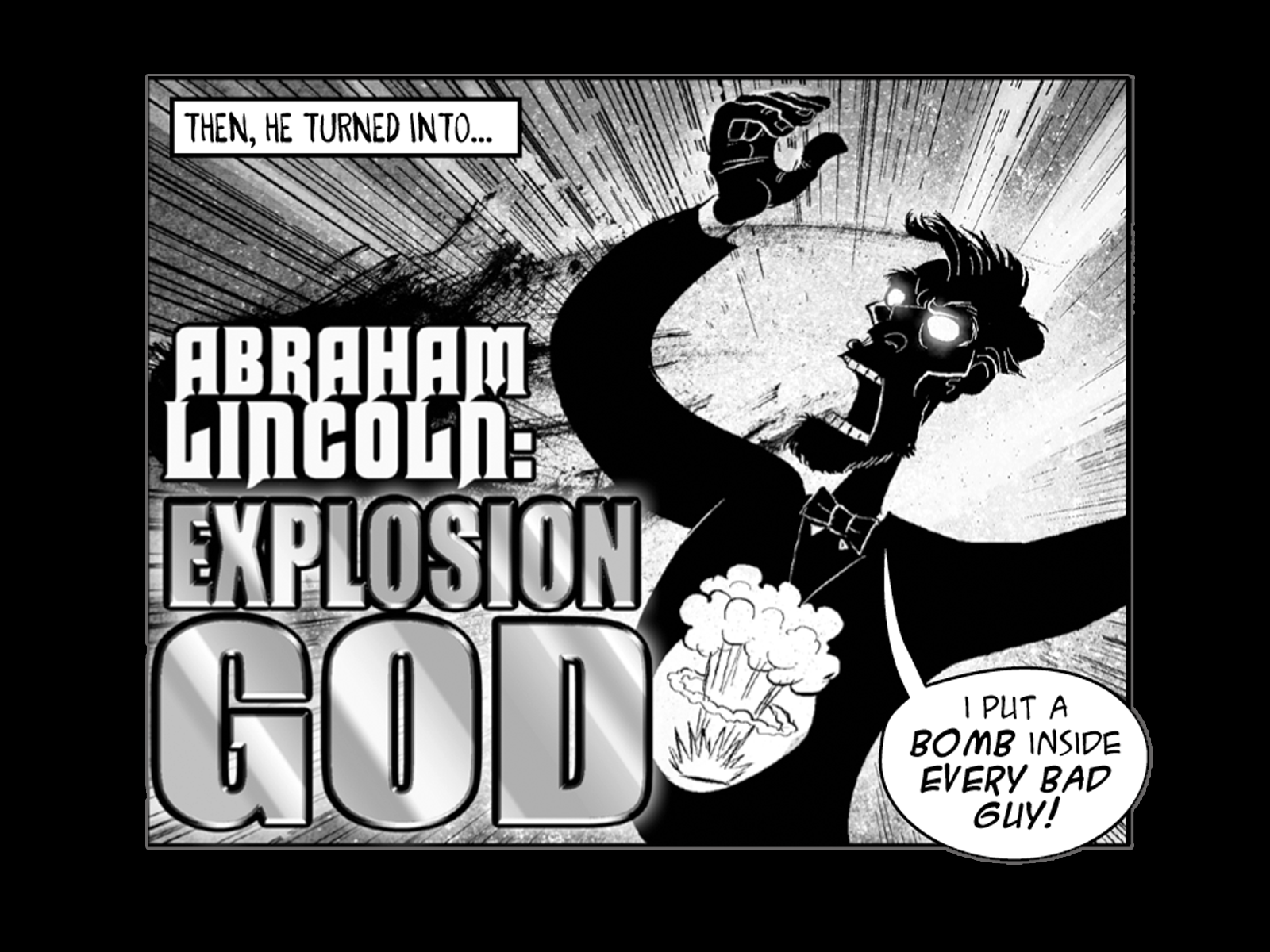 One of the most bizarre Ask Axe Cop episodes came from the question “did you ever shake hands with Abe Lincoln”.  Malachai's response was “no Axe Cop tried to marry her” and I said “Abe Lincoln is a man” and Malachai said “oh, well Axe Cop thought he was a girl so he tried to marry him.”  We went from there.  Axe Cop attempting to marry Abe Lincoln is not on the list, but I think it deserves mention here next to the moment it led to, which is when Abraham Lincoln used all the power of God to put a bomb in every bad guy so that he could change his sexual orientation and marry Axe Cop. 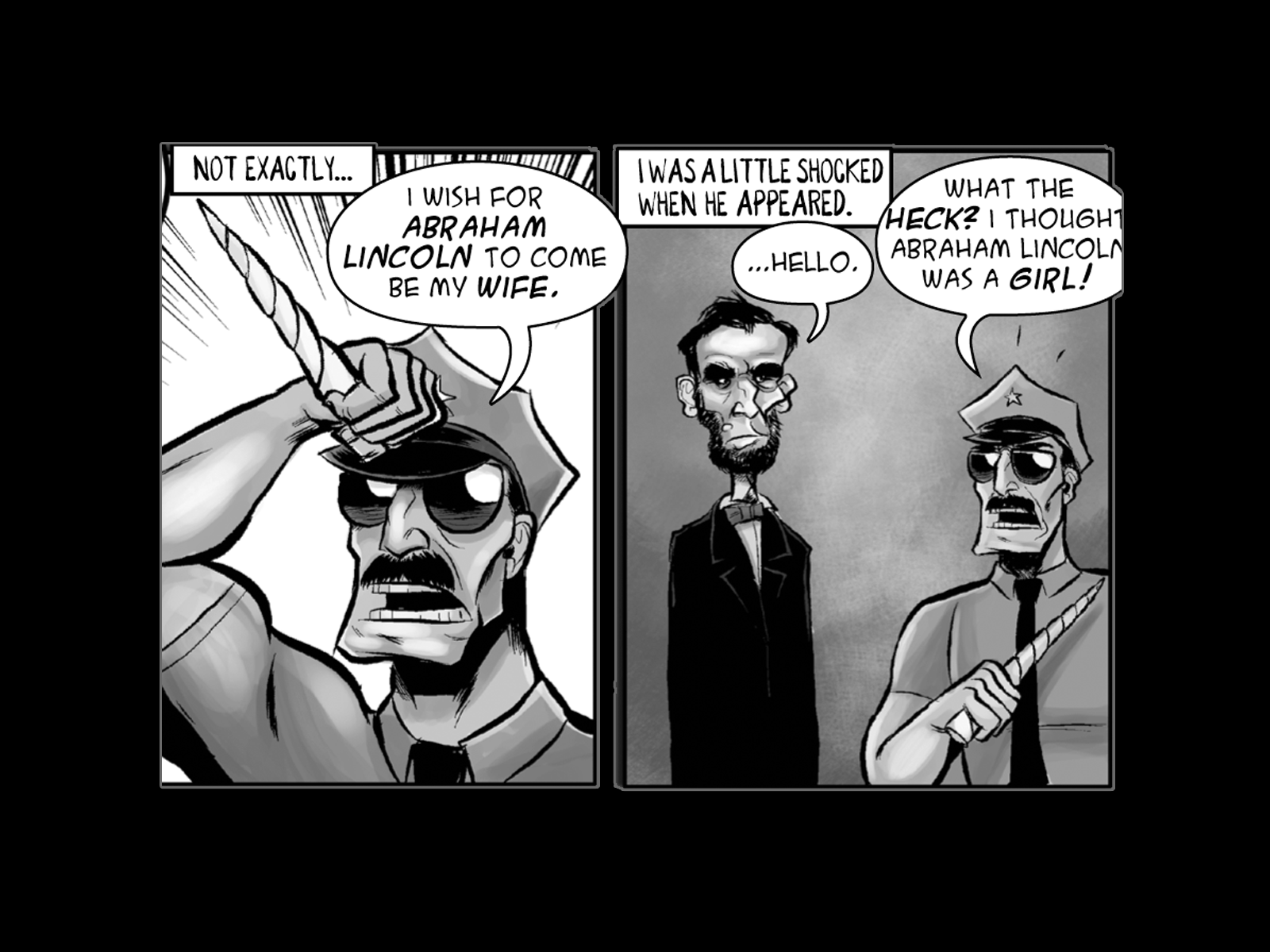 Ah the sweet random innocence of a child. 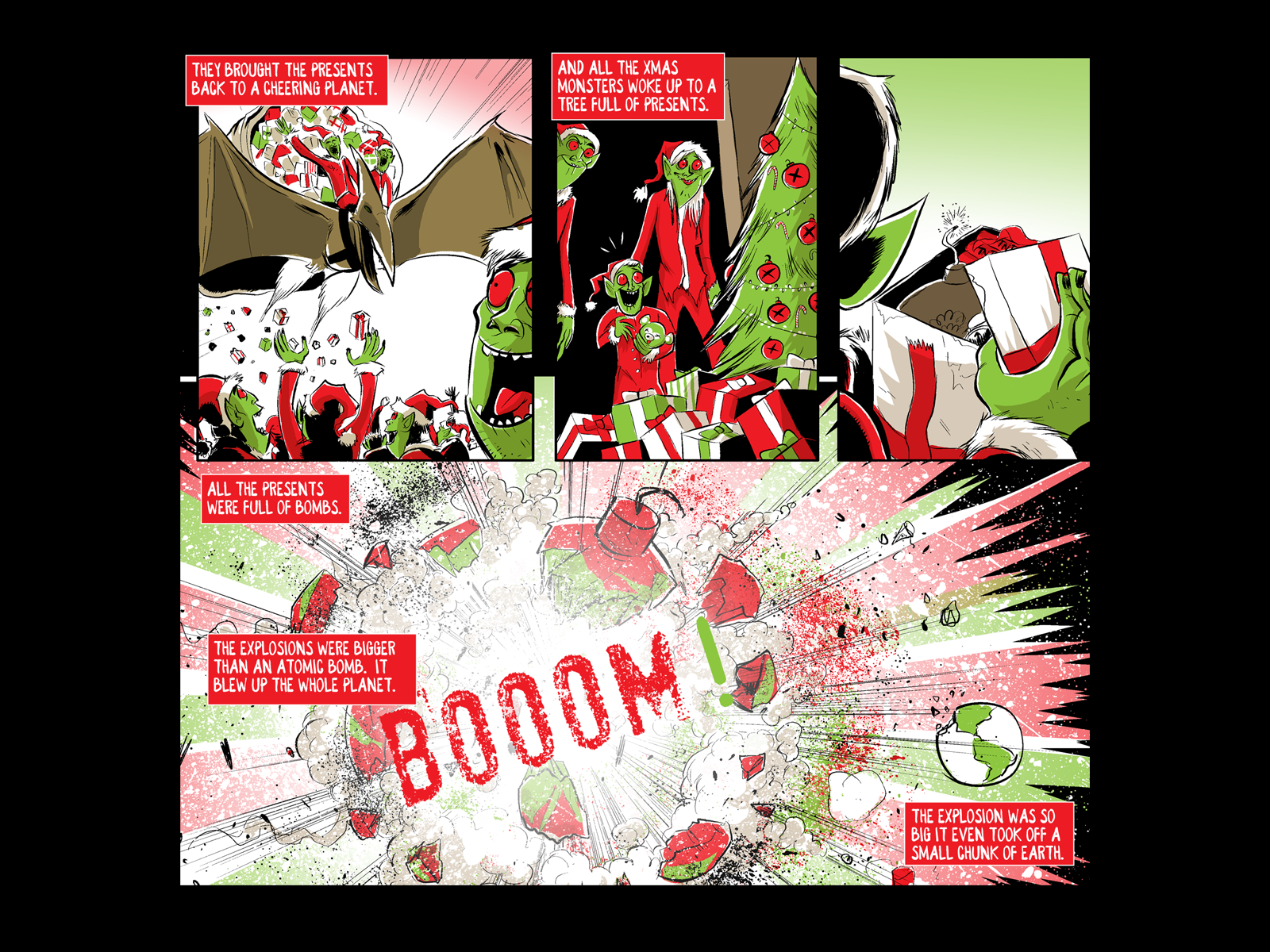 One of the great surprise endings we all should have seen coming a mile away, but most of us got caught up in the Christmas spirit of the moment.  Sure Axe Cop blesses the Xmas Monsters with gifts for Christmas… full of bombs.  No mercy for the wicked, even on Christmas. 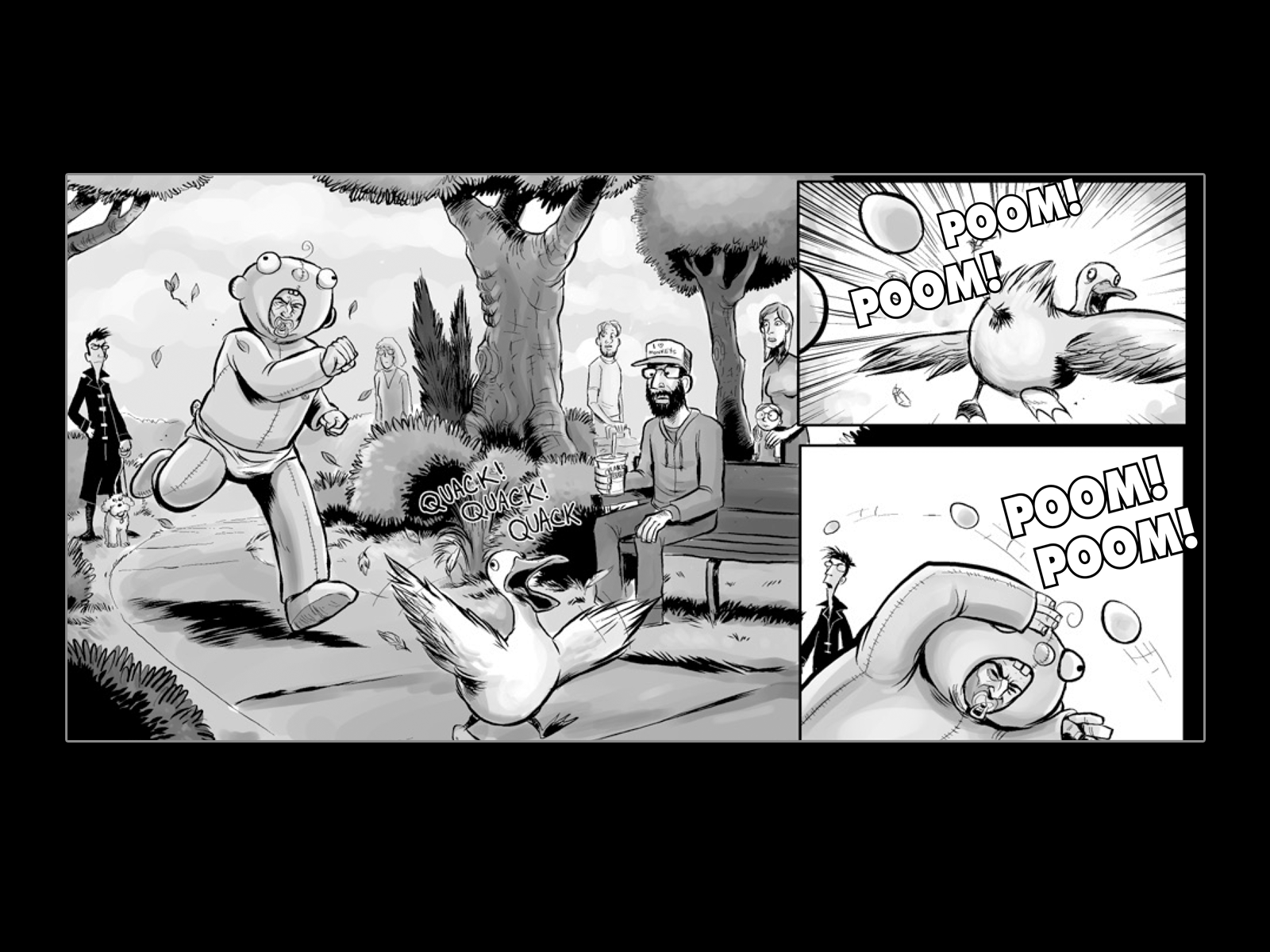 Yep.  After the initial Axe Cop tidal wave, Malachai hit a dry spell for a while and I decided one day to draw Baby Man chasing a duck.  It really went no where until Malachai caught wind of it and added his own twist: it shoots exploding eggs, and Baby Man is trying to eat it so he can gain its powers.  This was sort of a cat and mouse chase which I learned doesn't work extremely well in web comics because it moves so slow, hardly anything happens on each page and then you wait and wait to get to the end.  I think now that this is in book form the chase reads much more smoothly and fast like it was intended.  It is one of the craziest sequences I have ever drawn.

#4: The Old Fashioned Way That Nobody Knows 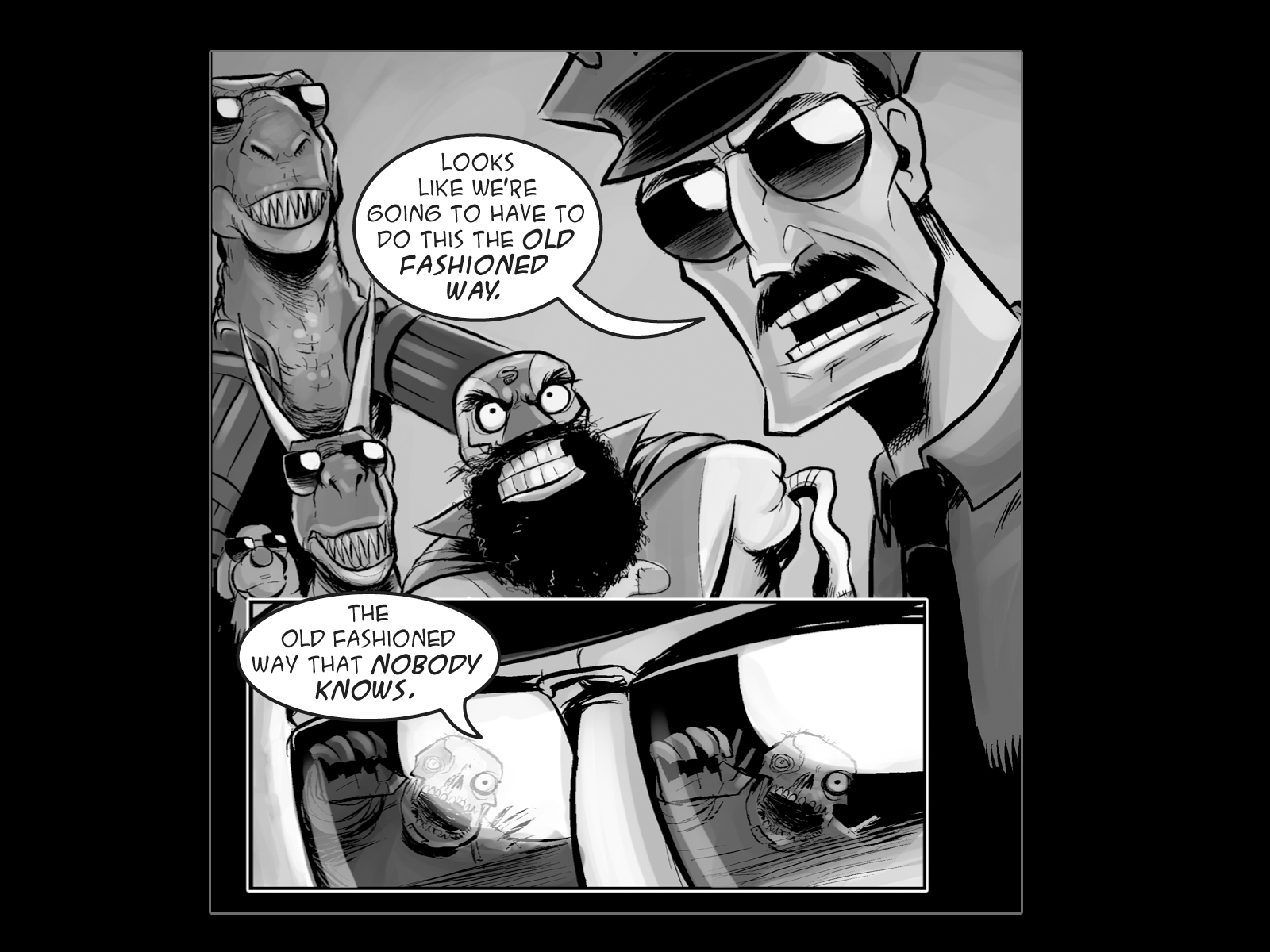 I admit I am surprised this one made it so high on the list, but it is one of those hilarious yet obscure lines that just sums up the confidence and ignorance wrapped up in the character of Axe Cop.  He is totally bold, even when he says something totally contradictory.  It turns out that the old fashioned way that nobody knows is to start your whole gang on fire and burn your opponent with fire power. 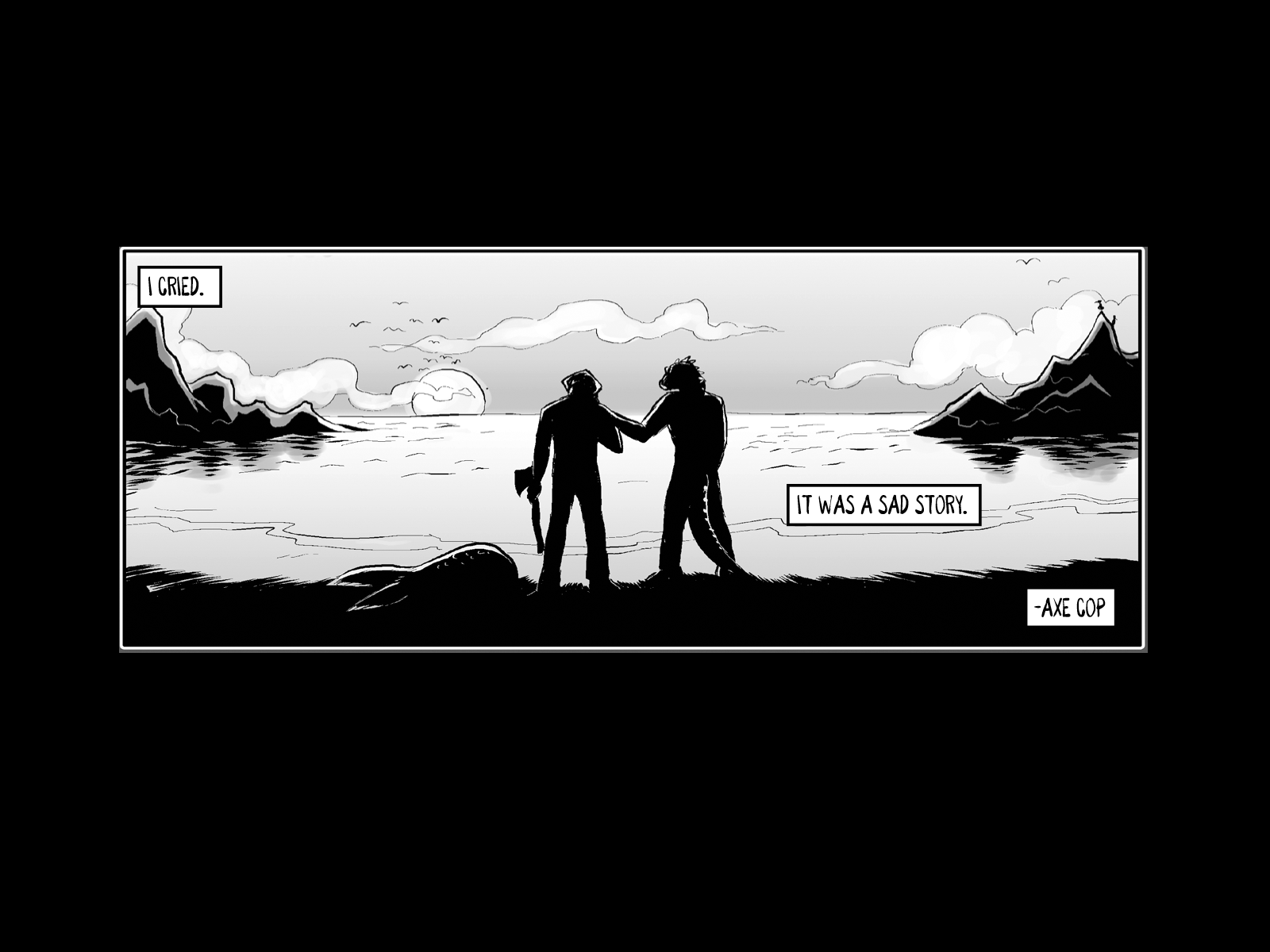 I consider this one of the greatest moments of Axe Cop because it proved to all the nay-sayers that Axe Cop, though written by a 5 year old, could develop as a character.  When Malachai wrote this, it sort of happened by accident.  He didn't realize he had written a sad story until he got to the part where Axe Cop killed a good guy and the only option was for him to cry.  So hilarious, so sad, so touching.  One of my favorite all time moments. 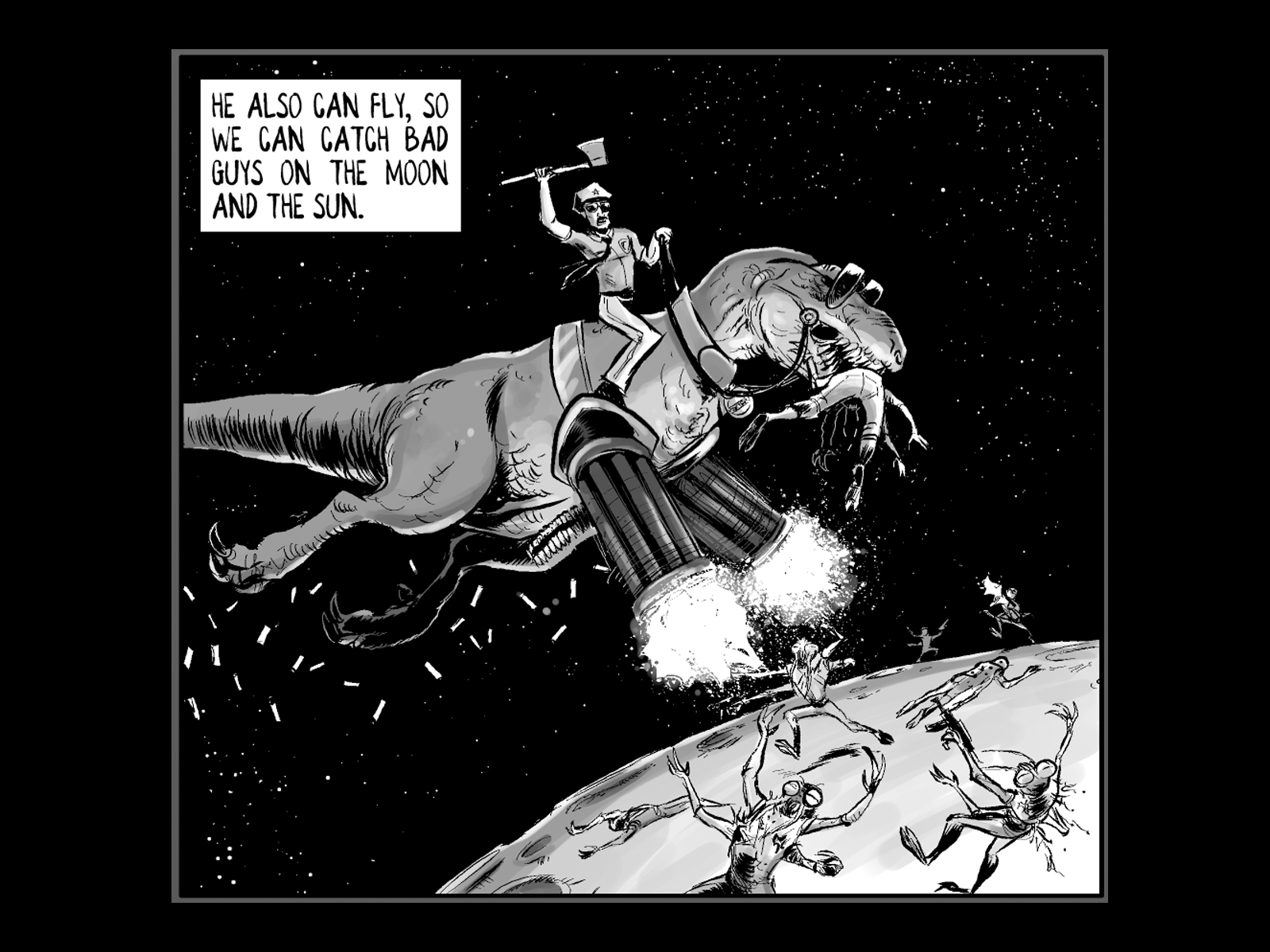 This moment definitely deserves this spot.  I remember the day I posted this episode the internet when wild.  Wexter remains probably the favorite character of the Axe Cop universe.  He is the essence of awesomeness, childhood fantasies and total manliness.  I think it was the creation of Wexter that really got Malachai into Axe Cop too.  The Axe Cop character was sort of made up by accident.  Wexter was purely Malachai welding his power as a new comic creator.   He is Malachai's dream pet. 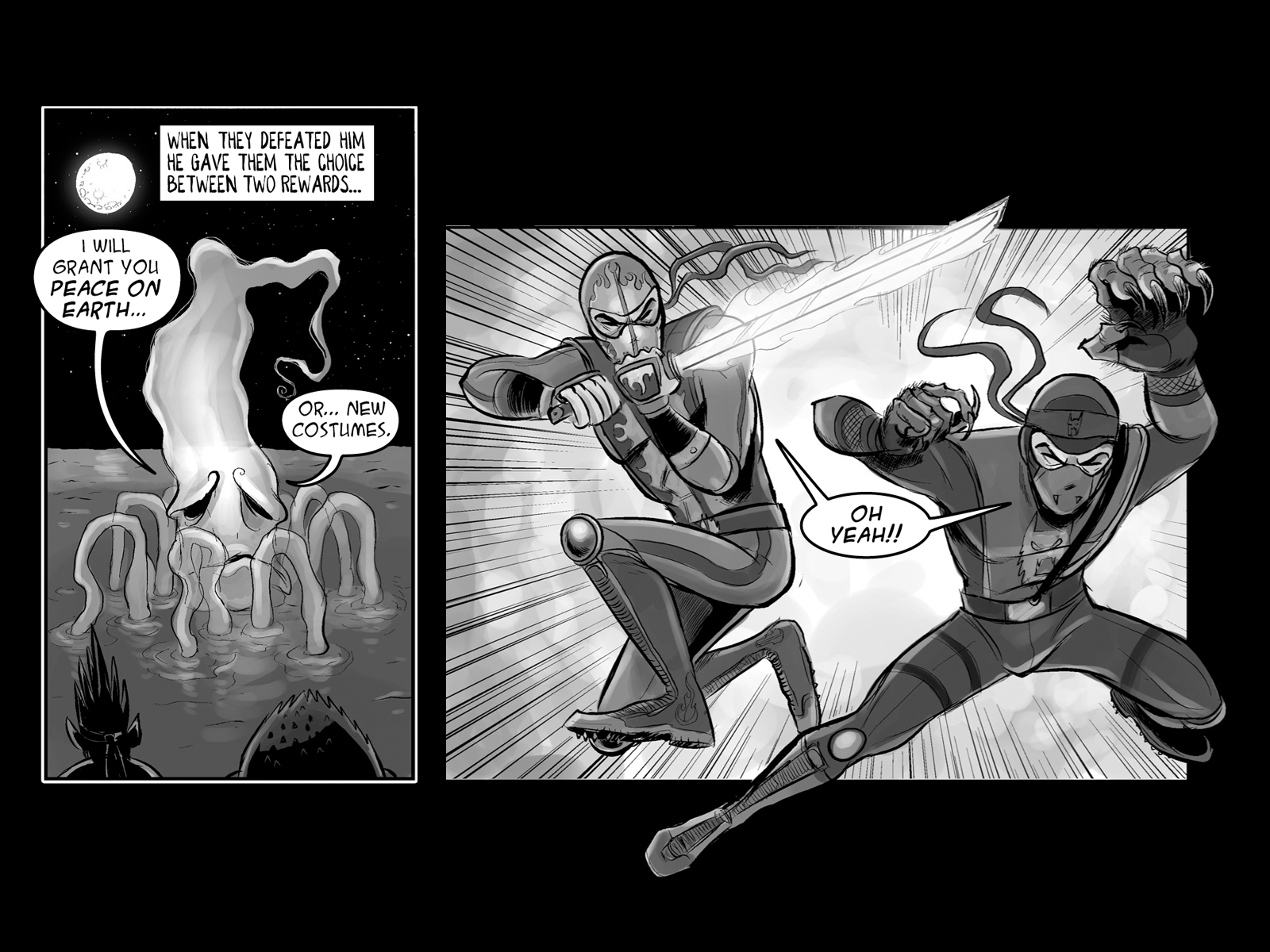 I was surprised this made first place, though it is one of the funniest moments for sure.  Malachai had actually decided that the Sea Ghost would give the Moon Warriors a prize that would make it so no one ever had to fight again (basically world peace).  But later on he decided they got new costumes.  I reminded him he had already decided that the Sea Ghost was supposed to grant them world peace and he said that it gives them two choices.  They pick the new costumes.  The new costumes were inspired by some dollar store ninja toys I bought for Malachai.  When he saw them he decided they Moon Warriors needed a new look. 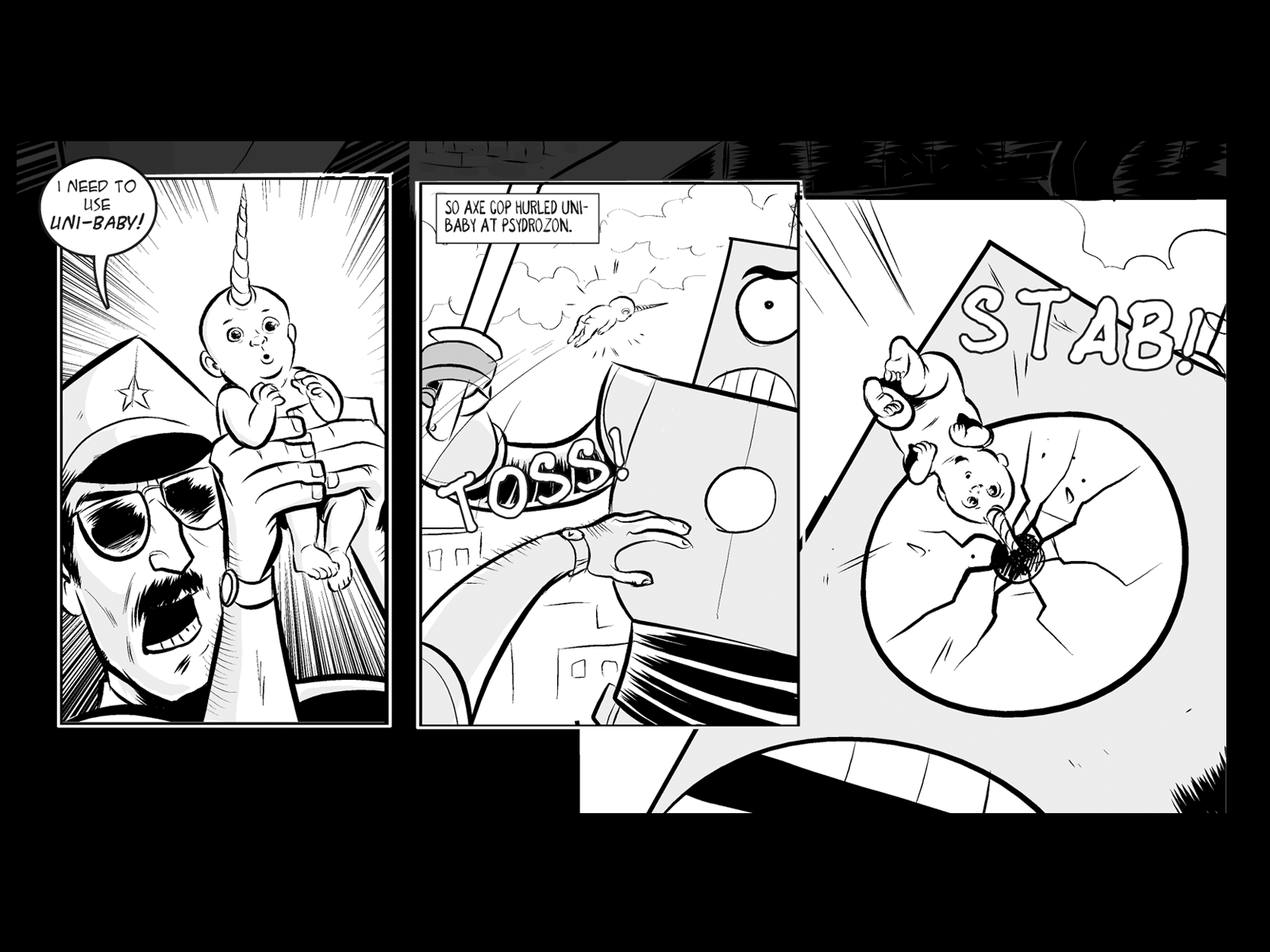 This was the beginning of Axe Cop's strange relationship with babies.  The cuteness, and violence of a baby with a unicorn horn used as an explosive device used to lob at bad guys is so iconic of the cute and insane world of Axe Cop.

I Pray For the Sharks 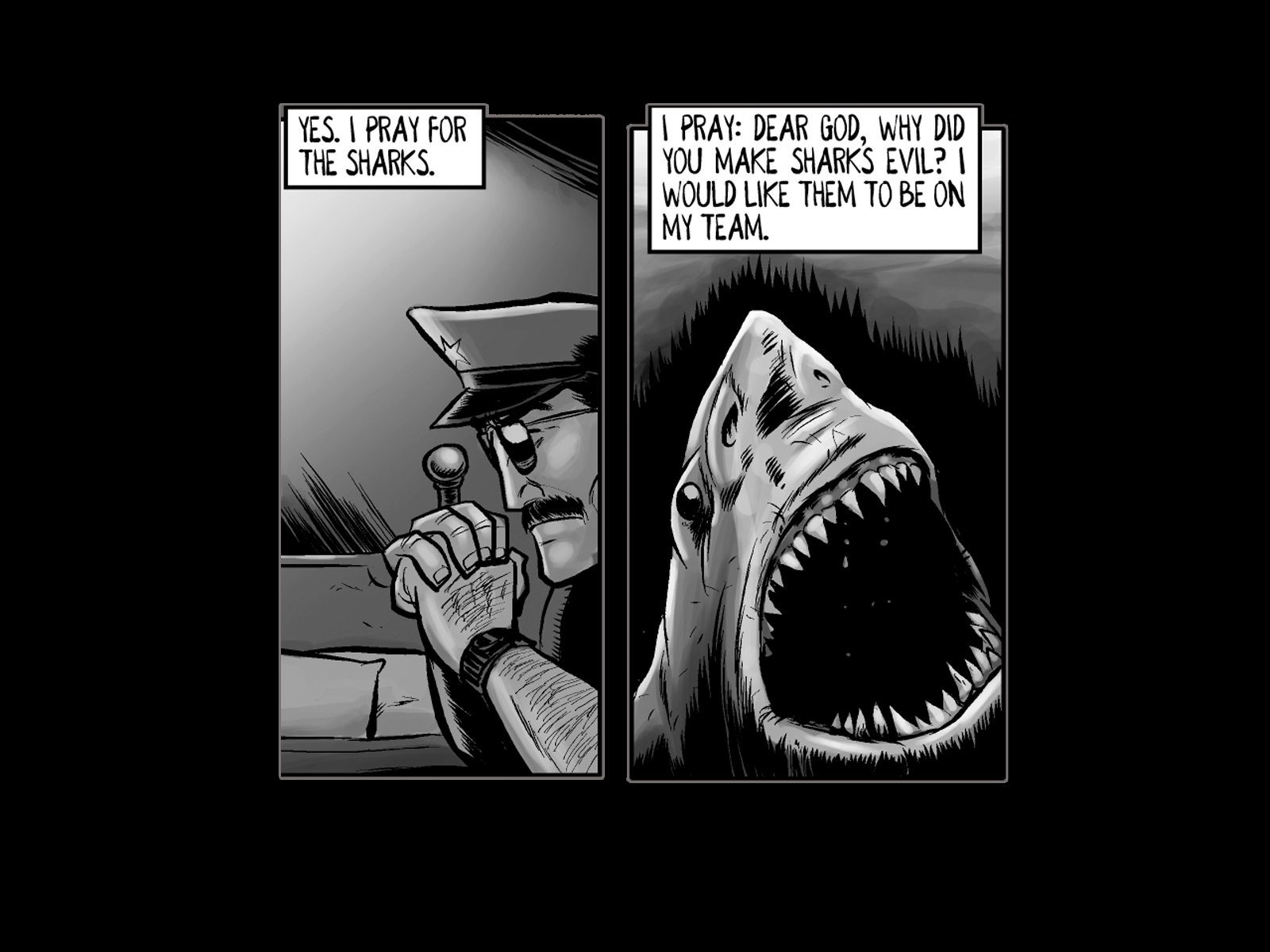 This episode came out of an actual prayer Malachai wanted to pray after a discussion on sharks.  Even the last panel.  We weren't even talking about Axe Cop at the time but it was so perfect I used it.  It remains one of my favorites. 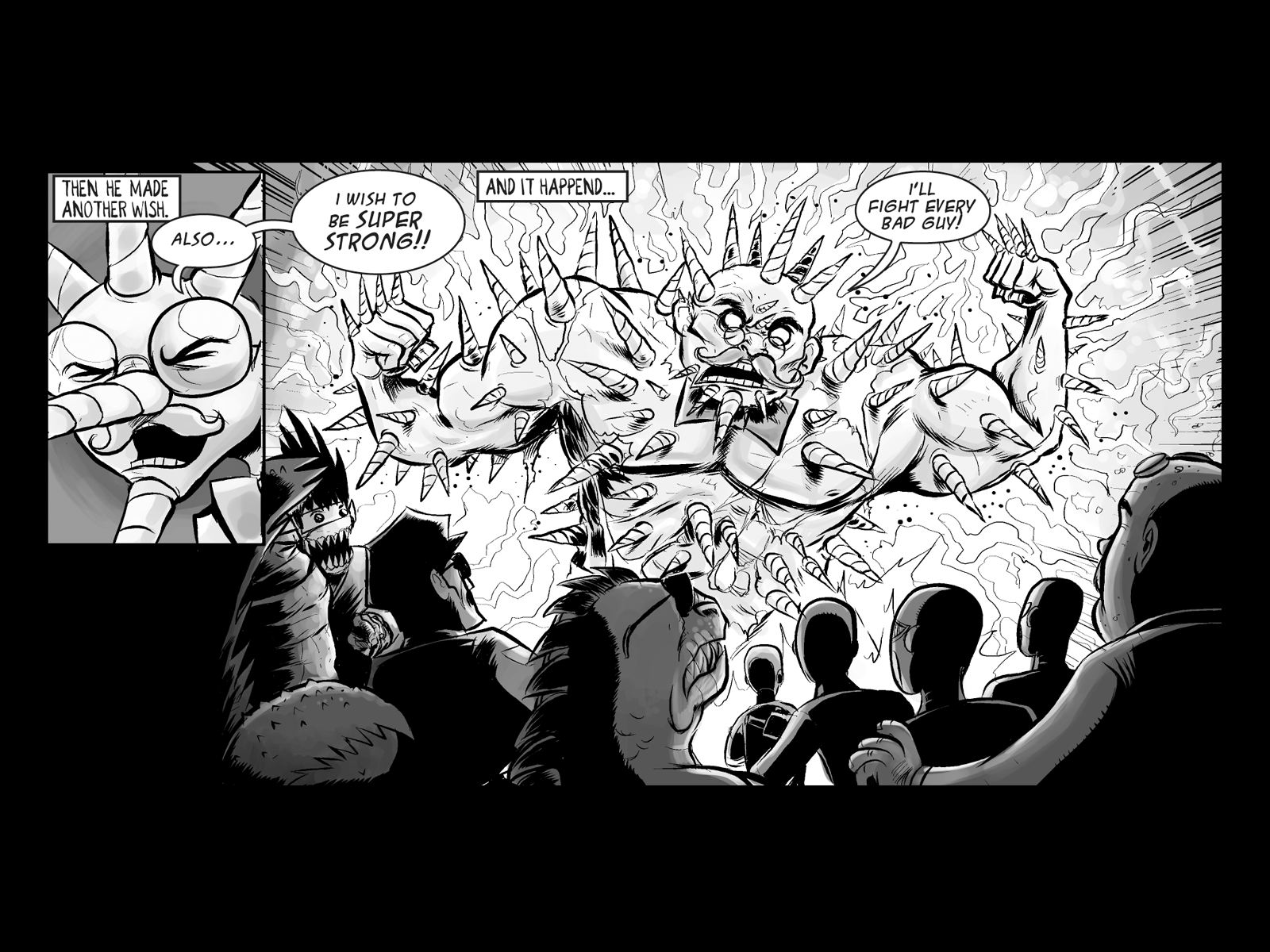 An amazing moment.  The once wussy, push over Uni-Man gets fed up, and he makes the ultimate wish: the get super smart.  Intelligence of course causes unicorn horns to sprout out of your body and he becomes a uni-porcupine.  He proceeds to send projectile unicorn horns sailing into every bad guy, including Satan and all his ships and soldiers.


Meanwhile, Inside a Nearby Swordfish 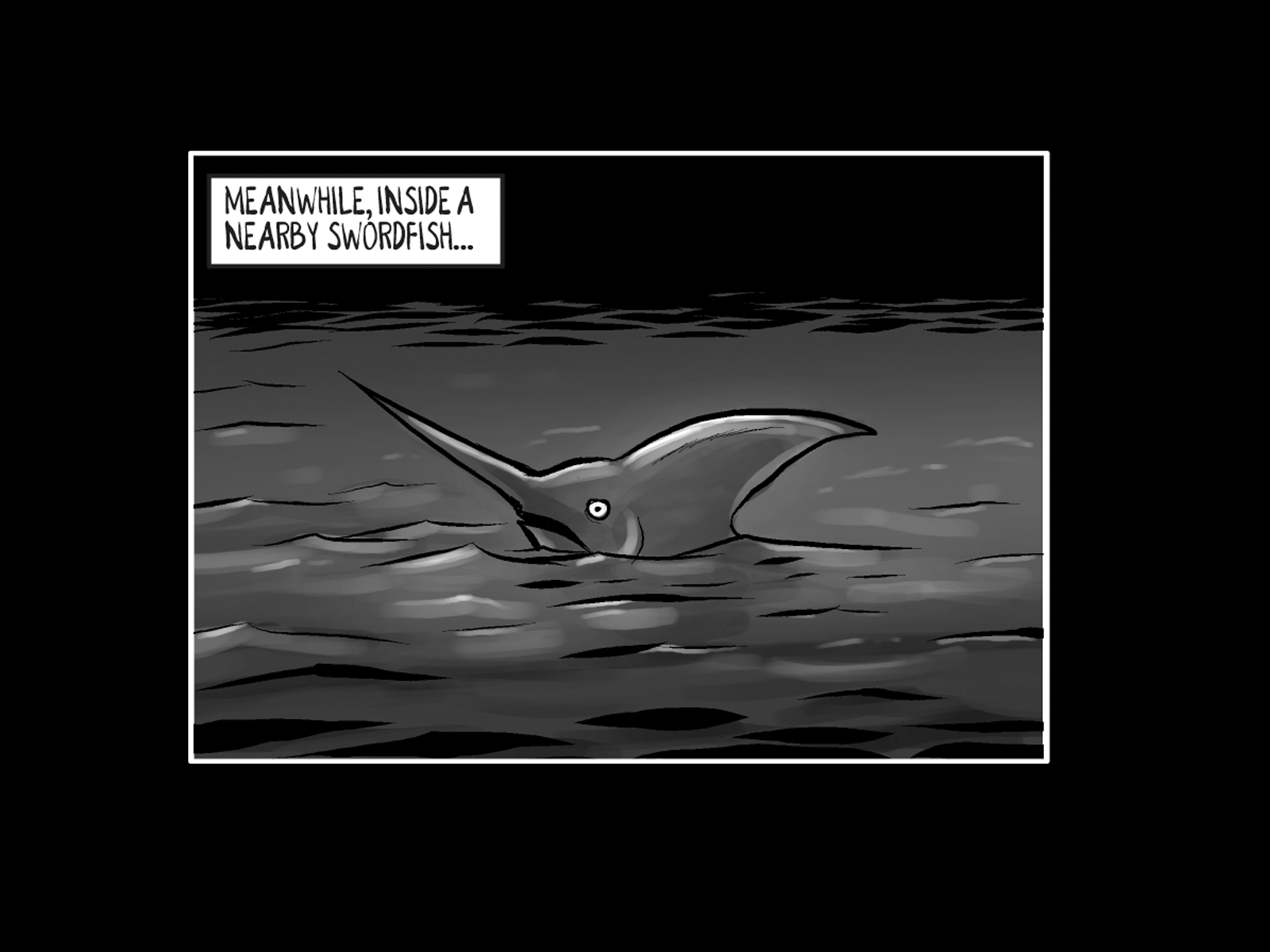 Totally random.  I remember asking Malachai where the Vampire Man Baby Kid is in this scene and he just says “inside a swordfish”.  OK… awesome. 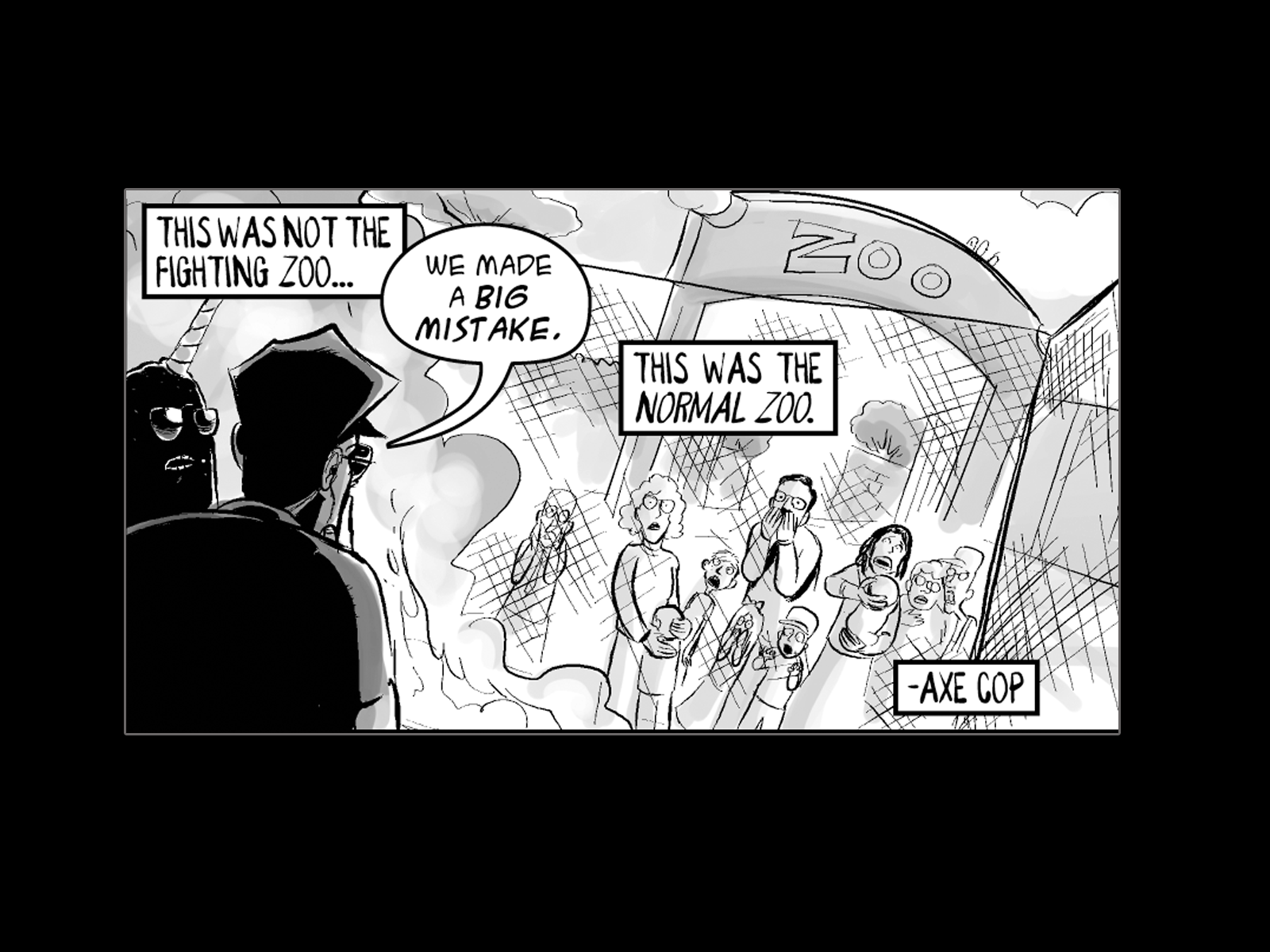 Similar to the mermaid story, but definitely a memorable moment, Axe Cop once again kills an innocent creature.  This time, it was an elephant.  Woops.  I still hope that someday Axe Cop does visit the fighting zoo, because it sounds awesome. 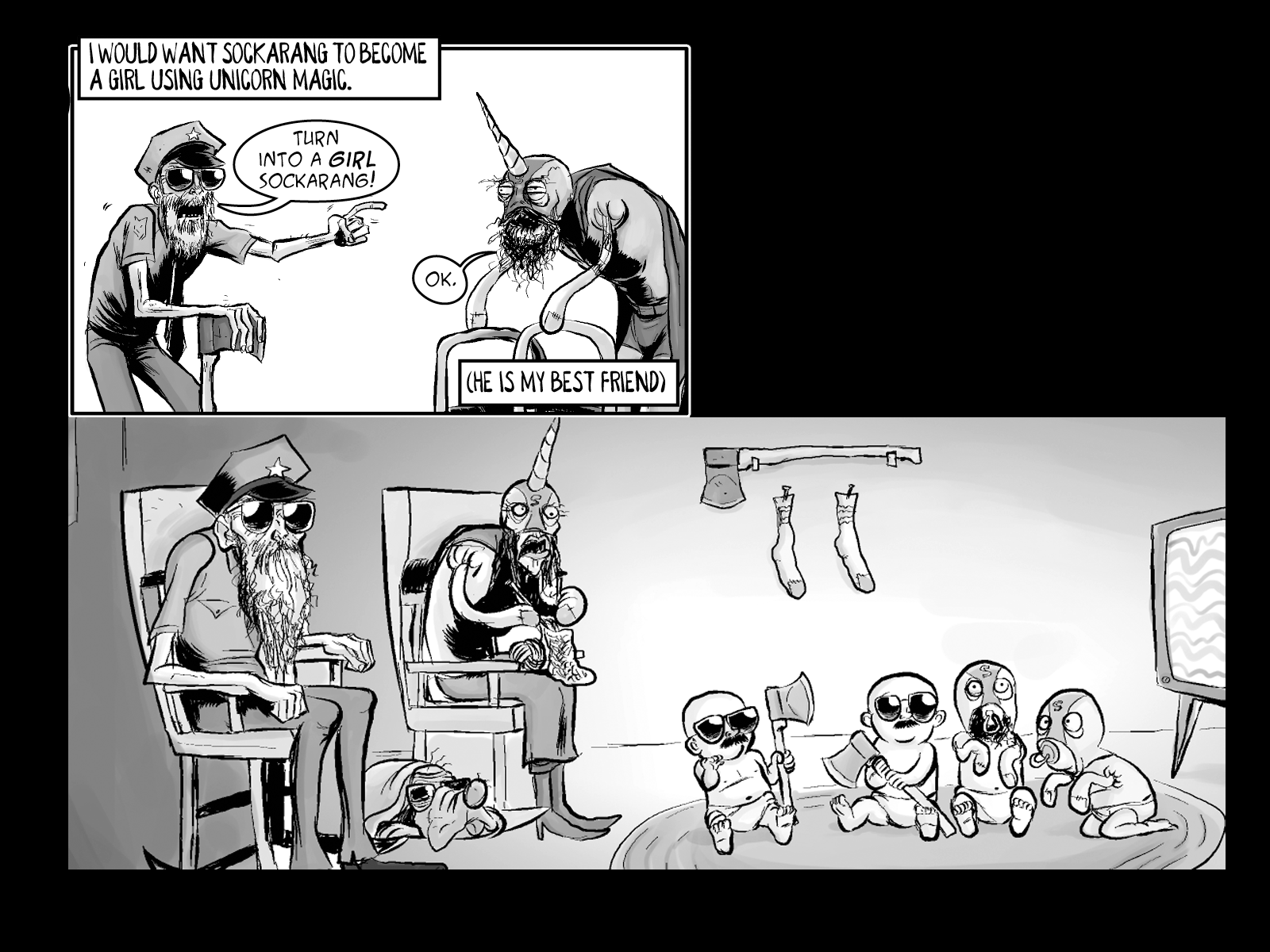 I really felt like this moment deserved to be in the top ten because it was one of those moments that was not just hilarious, cute, bizarre and horrifying all at once, but it was one of those “raw humanity” moments where Malachai without realizing it says something very true about human relationships.  He doesn't want to spend the rest of his life with some girl, he wants to spend it with his best friend.  It's the lucky ones who find someone who is both.

Well, that's that.  Onto year two!!  Thanks for sticking around, sharing the link, spreading the word and buying the stuff.  You make this possible, and it's a lot of fun.