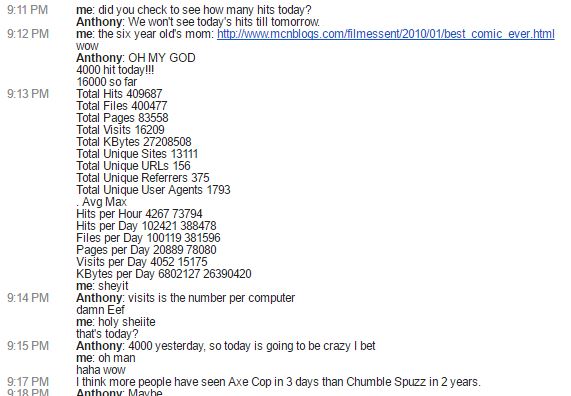 Going viral was one of the strangest and more surreal things I have ever experienced. The best way I can describe it is if you imagine yourself watching TV and the characters on the screen suddenly look at you and, not only acknowledge your existence, but think you are amazing. It creates a scary, strange feeling of both euphoria and disbelief. This can’t be real. This will end tomorrow. This is weird. What the heck is going on. Those are the thoughts that scamper through your head like hyped up chihuahuas at the dog park.

Twas the night of the State of the Union address. I was watching it at my friend, Doug’s house. That’s when I started getting crazy twitter alerts on my crummy little phone. The thing was going nuts. Every time I got mentioned or followed I got a ding, and the dings were dinging like crazy. It was like pop corn. It started slow, crescendoed, but never calmed down. I only had about 16 followers on the Axe Cop twitter, and suddenly they were skyrocketing.

My limited flip phone couldn’t really paint the picture for me of what had happened. I got home to my little rented bedroom with my day bed and got on my computer. My friend Anthony, who created AxeCop.com with me (he really built it, I just provided the graphics) was on my instant messenger.

I was up all night that night. Twitter would give these little notifications when I did a search for the term “axe cop”. The words “12 new tweets,” “24 new tweets,” “16 new tweets” were popping up every few seconds. I’d click it and the list would expand. I couldn’t keep up. There was literally only four pages of Axe Cop online and they had seen more success then the 1,000 pages of comics I had drawn before them combined, and only in one evening.

The next morning was when Hollywood and the press started to contact me.

(I am posting samples of our conversation to give a picture of what it was like in real time, though I think we spoke on Skype that night and I don’t know how to retrieve messages that old on Skype.)

Entertainment Weekly making AxeCop.com website of the day was one of the first big things to happen. Wired emailed me around that time too. They just kept coming. Comics Alliance, Mtv, CNN, it was nuts. In fact, it’s hard to even try to sort it out in my mind and type it all out. It’s like going on a crazy rollercoaster, then trying to describe the ride in detail after you have gotten off. What’s there to describe?  All I know is I was screaming and my face was flapping in the wind.

We were tracking down new links and posts to Axe Cop constantly. Google alerts were popping up like Viagra ads. Meanwhile the website wasn’t ready for this kind of traffic and it couldn’t handle it. We had this bizarre flash display for the comic that everyone hated. We were on one of those $15/year “unlimited bandwidth” plans. Apparently those don’t work for sites that get crazy traffic. All I know is after the site went into super tortoise mode for a while, it totally crashed and was gone for a full day or two in the midst of its biggest success. We lost all our stats during that time. I posted the comics to blogger just so people had somewhere to read them because requests were coming in like crazy. Our host said they couldn’t handle our traffic. We had to switch companies and pay for a dedicated server.

Did I mention I had around $116 in the bank at this time? Whatever I had, I didn’t have the money to pay for a dedicated server. $250/month. Before I had made a penny on Axe Cop’s success someone else was already getting paid. Anthony fronted me the money (he was smart and had a real job) and I immediately worked up a t-shirt design then posted it online for sale, even though it didn’t yet exist. Luckily people started ordering the shirts up and we had enough to pay for the server, to order shirts, ship them—and then some—in a day or two.

I don’t know why they did it, but Anthony and his wife Amy—who he had just married—took on the crazy task of running the online store. We agreed to a fee they would get per sale and they became my own little fulfillment company.

You can read the original blog from the first month of Axe Cop here.  The point of these posts I am sharing now is to paint a bigger picture of what was happening during those days. Stuff I couldn’t really talk about then.

I’m going to have to break this topic up into a couple more posts because so much happened. So, next time I’ll get more into what was happening with getting contacted by agents, journalists and all of that kind of stuff.