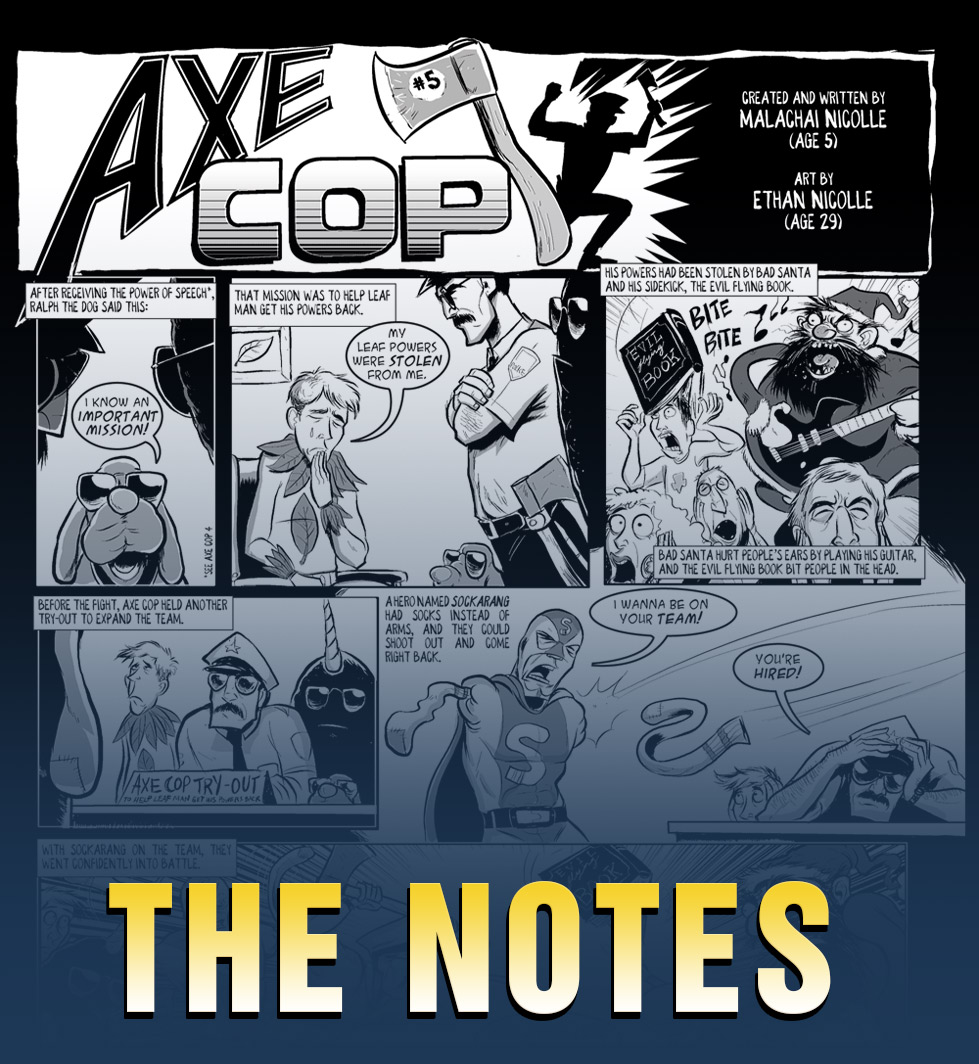 I’m taking a break from my Making Axe Cop blogs this week. Instead, as a continuation in the history of Axe Cop, I am going to share with you the raw notes I took on my phone called with Malachai to write Axe Cop #5. Axe Cop #0-4 were written in person, so I didn’t have notes for those. This was the first time I tried writing with Malachai over the phone. I was amazed how well this went. I was afraif it wouldn’t have the same feel. In some ways it was different. It was a lot more information, less action. But it was actually a great way to work. I found this old text file in my Axe Cop folder.

I have a folder on my computer I started called “Malachai” when he was three. It includes a few drawings I let him do on my Wacom tablet, and a few drawings he dictated to me as I drew, then one day I added a folder called “Axe Cop”, because I drew a few Axe Cop comics with him. To this day, my “Axe Cop” folder is still inside the “Malachai” folder, and it is freaking massive. As you read, if you know the comic well, you will see how I organized this and did some editing.

malachai:
important mission
we need to save leaf man.
leaf man has powers but the bad guys stole his leaf powers
bad santa stole them (he steals the presents from santa)
bad guy gang… with an evil flying book that bites people and eats people
the book’s name: “evil flying book”
the book is actually a robot

(Malachai speaks as Axe Cop in first person)
at the sign up place someone was yelling for us, so we quit the mission
what’s your name? sockarang (boomerang socks) .. socks for arms
bad santa has christmas magic and the power to hurt ears (hurting ear power)
sockarang gets the blood of evil Santa and becomes super villain santa that is good

avocado cop touches the blood and becomes evil santa too

Follow up questions:
Q: Does avocado soldier use his horn for any magic? (maybe to change back into flute cop with a horn?)
A: He wishes to give leaf man’s powers back
Q: what does Ralph do?
A: he just watches and sings a loud song “tick tock the mouse ran up the clock”

Q: Does anyone die in the fight?
A: Good santa stole bad santa’s guitar
They go back to a try out: baby man.
“Shake what your baby gave ya.”
A baby that can fly when he gasses
A man who has a baby suit
The flying book is the hardest one
Uni man and a wrestler
Wrestler throws uniman at book

Q: Where are the bad guys? do they get leaf man’s powers back?
how do they get the blood out of bad santa?

in order to fight these guys they must have another tryout.
At the tryout, Sockarang joins the team. His arms are socks and they shoot off and return like boomerangs.
So Sockarang, Leaf Man, Axe Cop, Ralph, and Avocado soldier go to fight bad santa.

At the fight, ralph just sings “tick tock the mouse ran up the clock”.
Bad Santa hurts their ears with his guitar.
Evil flying book keeps biting them.
They retreat to hold more tryouts.

At the tryouts they recruit Baby Man, Wrestler, and Uni-man.
Uni-man says he took up crime fighting when his child was stolen.
Baby man’s motto is “shake what your baby gave ya.” and he can fly when he gasses.

In the fight they realize that the book is actually a robot.

The wrestler throws uni-man into the book and it explodes.
they defeat bad santa by taking his guitar… sockarang gets bad santa blood on him and gains his powers.

They win, but leaf man never got his powers back, so avocado soldier gives them back using his unicorn horn.