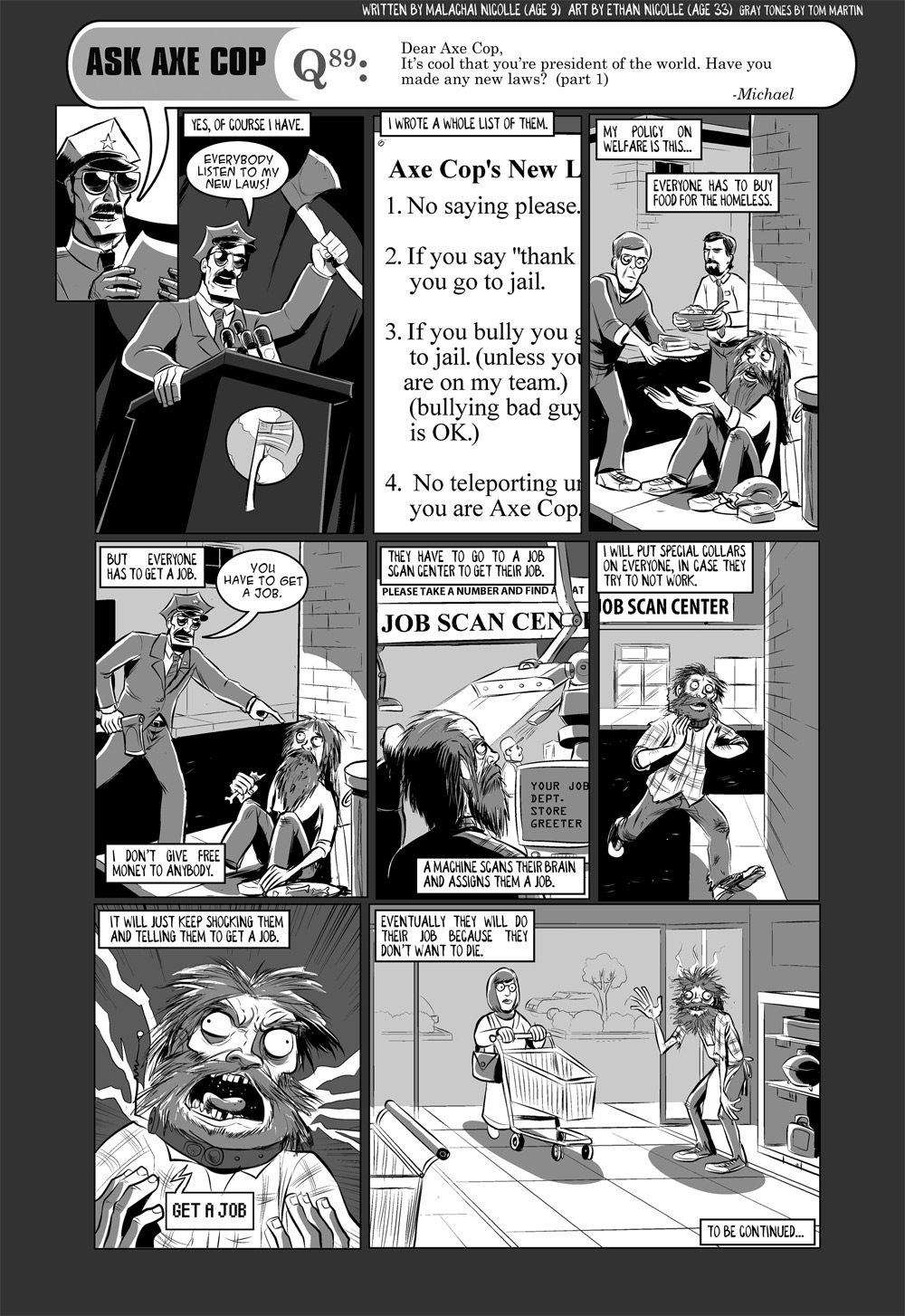 If you have seen me at any recent conventions (since San Diego), you will recognize some of this page and especially the next part.  I present to you: the laws of President Axe Cop.  This episode mostly focuses on what Axe Cop does about jobs and poverty.  I did my best to explain to Malachai the conundrum of politics, and the two sides of the issue… that if you give people too much free money they will not work and earn their own, but sometimes people really do need financial help, so you have to decide who gets free money and how much.  But then of course you have to have some honor about it because otherwise you are just buying votes.  He took it from there and came up with the “love they neighbor law” and the job shock collar.

Well I had a great time in Leeds, and an awesome Thanksgiving in Nashville.  You guys seem to be enjoying Revenge on Rainbow Girl, and so am I.  I think Tom is doing some awesome work.

Amazingly… yesterday I received an email from myself from 6 years ago.  I apparently was up at about 4am on Dec. 4th 2007 and came across a link to a site called “FutureMe.com” and sent myself an email talking about where my life was at and my hopes for the future, as well as some advice for myself.  At the time, I lived in a small attic above a garage.  My band had recently broken up and I was pretty lonely.  I was making very little money because it was my first year really trying to be self employed.  I was just starting to work on Chumble Spuzz vol. 2 and at the time I don’t know if I knew I was going to move to California soon.  I had a horrible sleep schedule… I would stay up all night until 10:00am, then sleep until 6 or 7p.m., totally avoiding the sun.  I drew a TON but I had no idea if it would amount to anything.  In the message I reminded myself to keep in touch with my family, do your best to be a regular part of Malachai’s life, and the lives of my sisters, as well as my other brothers and my parents.  It was so weird to get this email from a version of me who had no idea what he was in for.  Crazy.  I teared up a little as I read it, mostly because I know that guy was painfully lonely and I have never been happier now, married and living in a home with a family, able to provide for them with my income from drawing comics.  I really am in the midst of a dream come true.

Last weekend, season one of Axe Cop ended on FOX.  Axe Cop is not over yet, but we will be in a season break for a while.  If you saw the “Best Fairy Ever” episode, Axe Cop sings the song “Chicken Little” in his band.  The folks at ADHD asked if I could get Malachai to sing how the song would go, so I asked him to call me up and leave a voice mail singing Chicken Little as he heard it in his head.  This is what he recorded.

That’s all I’ve got this week.  Thanks for reading!