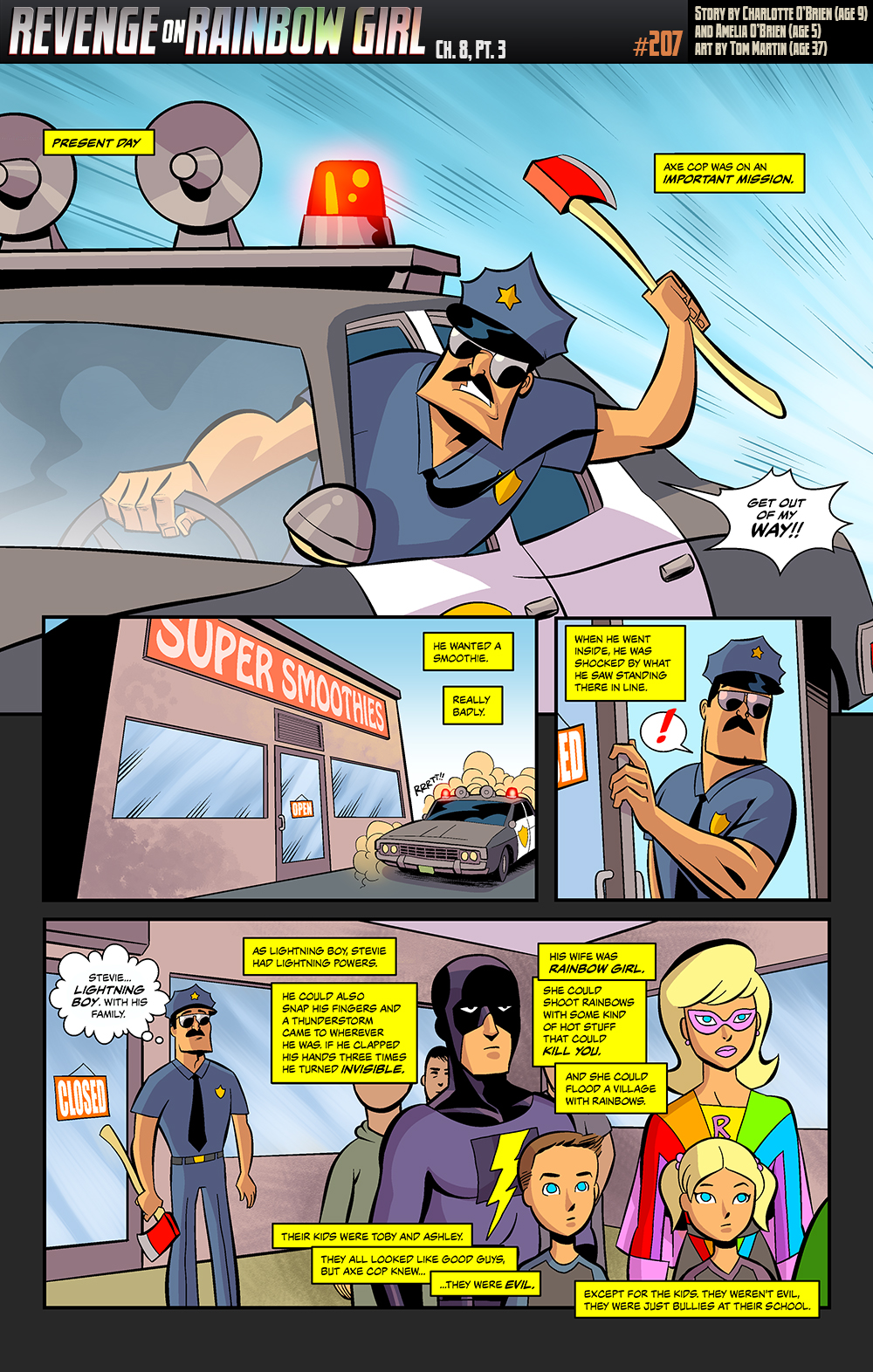 There she is. Rainbow Girl. She can flood a village with rainbows, so watch out and keep your village in line.

…Not having much else to say this week, I thought I’d paste to you a ghost story Amelia wrote last year as we were sitting in chairs around the wading pool, drying off in the sun. She started rambling off a horror story and I recorded it, then typed it out. Here you go.

So, once upon a time. You know… a girl was in a gravestone, and one gravestone was open. There was a big cage. And that was the (indecipherable) cage, it said “don’t enter.” And then she goed into… she had her flashlight and she looked everywhere. And then guess what? She hears sharp claws. GRABBED onto her leg! And then it grabbed onto her whole body. She fall on her face, and then “Rarrrr!” It was a black bear. And then it almost ate her but then she runned out and goed back home.

Then the bear came alive. Now it’s just a ghost, so that’s actually white. So then he runned home. You know how ghosts can go through things? The bear goed through her roof. And goed upstairs. Then it goed upstairs into the attic. And then she saw the ghost. She runned down, runned into its cage, and runned out, runned into her room! She couldn’t find anywhere to hide. So she just… the best place to hide was the quietest place ever. It was empty. It was a perfect hiding places. And then, guess what? She hided, and the ghost didn’t go there because she locked the door. But the bear had keys, and you know he can unlock things? He unlocked it. He goed in, he looked. She had the goodest place ever. Guess where? The cabinet. And then, guess what. She blowed him bubbles. And it popped on him! His body keep going blup, blup, blup, down. And then, guess what, he died.

There, the ghost found her. His feet was left. His feet had a mouth. She didn’t even know that! And had eyes. And everything a body could have, except legs. Except arms, and legs, and a belly. And they have hands, so it grabbed her. Boom! And then he had hands so he could do that. End of chapter three.

The bear ate her.

She really did say “chapter one,” pause, then say “chapter two” and continue. The story ends on a dark note- Amelia can be spectacularly morbid, but always with a big smile, like she doesn’t know that what she’s saying is really grim. She was singing an impromptu song once that went “My birthday is today, my funeral is tomorrow.” Creepy.

Oh, hey, I almost forgot that months back I recorded the inking of the top panel as a speed art video and did a voiceover of the process. Here it is, check it out.

“Once when I was little I tried talking to a dog.
I said ‘ruff ruff ruff.’ It started barking at me and
I thought I’d accidentally said something like
‘your breath smells’ in dog language or something.
I got embarrassed so I said ‘I’m sorry’ and went inside.”
-Charlotte, 7 years old

I let Mia have a handful of change.
“Now I’ve got millions of money!”
-Amelia, 4 years old