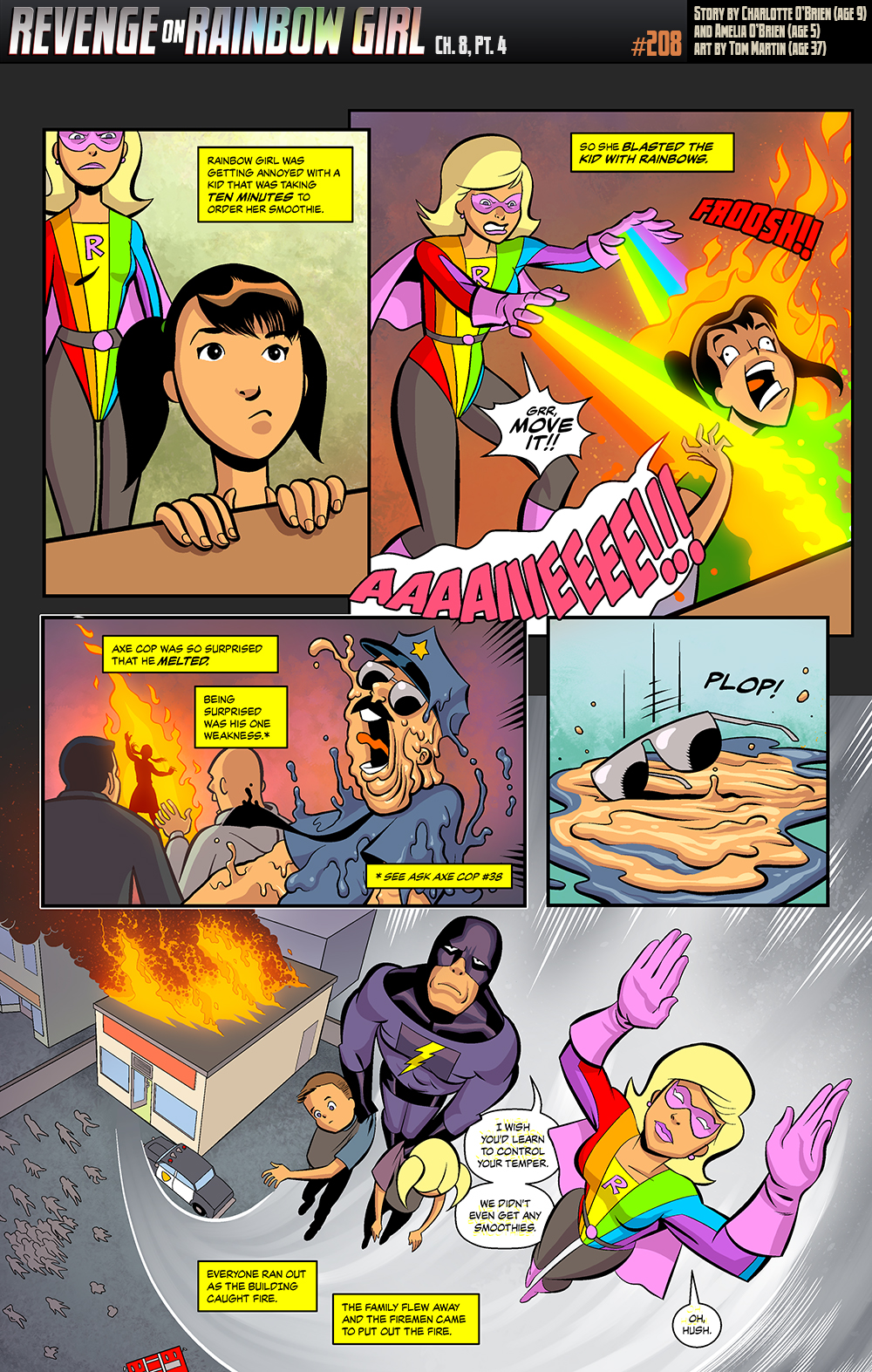 Let this be a lesson to anyone that takes too long in line: know what you want when you get to the counter, or die of hot rainbows.

I believe this marks the first time Axe Cop has melted from surprise outside of the Ask Axe Cop wherein it was revealed as his one weakness. Correct me if I’m wrong. Funnily, Charlotte didn’t know about his one weakness when she wrote this scene. It went something like “Axe Cop is so surprised that he faints.” I told her about his problem with surprise and melting, and things just came together. I tried to make the panel of him melting something of an homage to the original panel, because I really laughed hard when I first saw it. On that note- man, it’s weird to work on something you’ve loved for years.

Today’s Amelia’s birthday. Her nickname is “the bean,” because as a baby she didn’t do much. This led to her being called “beany,” “beanydoo,” and “the beaner,” which we didn’t know at the time was a racial slur. Whoops. She gave herself her own nickname, once. She walked downstairs, held her arms up in muscle poses, and started yelling “I’m a beast! I’M A BEEEEEAST!!!” We have no idea where she got the idea, but it stuck. We use that nickname for when she proves herself to be unnaturally fierce or brave, like when she enjoys getting shots at the doctor’s, or when she launches into one of her hysterically funny silly performances that just come out of nowhere. Her dual nickname has become a Jeckyll & Hyde thing for her. She once said that she’s “beasty during the day, and beany at night.” We don’t really know what that means.

Here’s an Axe Cop guest strip she wrote a while back. I still giggle girlishly about Hulk Wonder’s powers.

Charlotte is drawing a picture of me. She says
“You’re not gonna like this. Not unless
you like tiny hands and squished-up arms.”
-Charlotte, age 6

She IS the beaniest. Amelia’s a great kid and I love her madly. She’s very excited about her 6th birthday, so if you’d like to brighten her day, wish her a happy birthday in the comments, would you? I’ll have her read them when she gets home from school.

Thanks everyone! Have a great week.