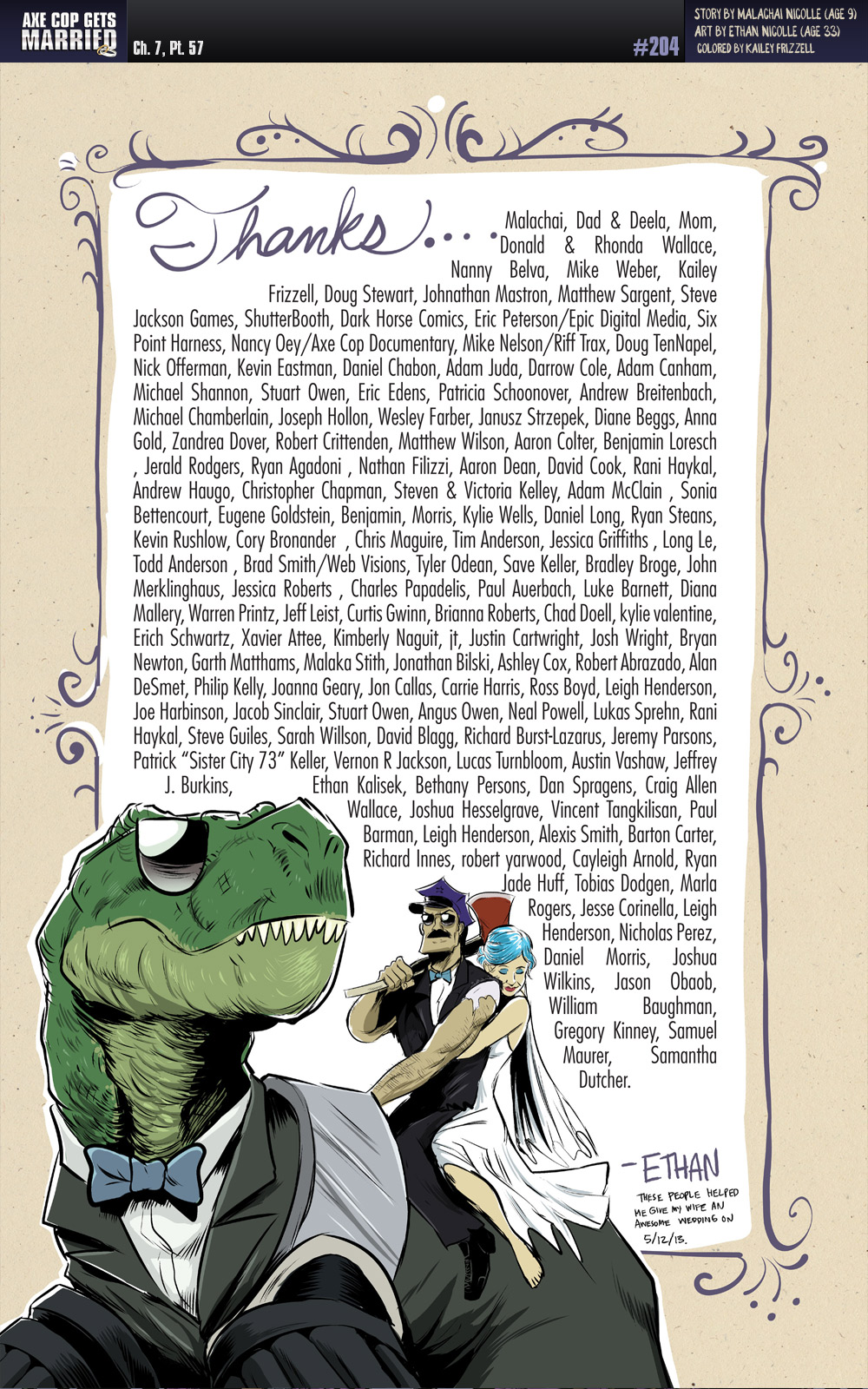 My wedding was, up to this point anyway, the best day of my life.  I had been a lonely, lonely man for a long time.  I was not looking for a casual relationship, I wanted a woman who wanted to be my wife and wanted to have a family and live together forever and ever… a woman who loved God, loved me and I could not only fall in love with, but share true friendship with.  That kind of woman can be hard to find, especially in the vicinity I had found myself (Los Angeles County).  When I found Jessica, I knew pretty much from our first date that I had found my wife.  I was so thrilled to have found her, that on the same day as our second date, I also had lunch with Nick Offerman for the first time, and I was so distracted by my excitement for that evening the entire time.  My life was pretty wild… I was in love, and I was getting a TV show.

For a period of time, I was doing well financially.  People assume that if you have a well known comic and a TV series you must be set for life, but no, it’s not that simple.  There are good times and hard times.  Amazingly, around the time I had made a down payment on an engagement ring, my car’s engine fried and cost me $7,000 to replace.  I did not have that kind of money, and what I did have was supposed to go towards the ring.  Amazingly- with perfect timing, a royalty check arrived in the mail that was shockingly bigger than any other royalty check I had ever received up to that point (and since!).  The check covered the cost of the engine and it enabled me to upgrade the wedding ring.

Then, things really did sort of dry up for a while.  The way my “career” works, money really does tend to be unpredictable.  Licensing deals come at random, so I may get an advance on a licences at the same time I get an advance on a book deal, but then I get nothing a month or two, or three… So as we began wedding planning I realized I really was hitting a financial dry spell (literally only months from the TV show premier).  I had only done Christmas commissions a few months earlier, but I knew I had to try something to help me raise the funds to pay for the wedding.  Paying for the wedding was a big deal to me.  My wife came out of a relationship where she covered the costs of just about everything, which I found deplorable, and it was a huge deal to me to show her I was not only able and willing to cover this gift to her, but that I could be creative in times of need and, if money was not coming in, I could make it show up.  So, along with taking on a few little side jobs, I started the “Axe Cop Wedding” campaign, where I would create special exclusive items like a sketchbook, prints and other stuff (similar to tiers in a Kickstarter campaign).

My brother, Malachai, had already been to a number of weddings because both of our other brothers had been married that same year, and he was always the “ring berrier”.  Malachai loved my new family-to-be.  So I asked him what he would think of doing a comic to help me pay for my wedding.  He was all for it.  I proposed a few ideas, like maybe Axe Cop has a nightmare that he gets married, or maybe a bad guy tricks him into it… because I couldn’t really imagine Axe Cop actually getting married.  But Malachai, very matter-of-fact, said that Axe Cop would marry Axe Girl.  Though, not long into the writing process, somewhere along the way, Malachai decided that Axe Girl was too much like Axe Cop and that Axe Cop would marry his friend.  I have no idea where he hit this, but he had stumbled upon a very classic love story convention…. if you fall in love with someone who is just like you, or who fits your ideal of the perfect person… you probably are really in love with yourself, or your magnificent ideals.  You are not in love with the real person.  If this is you, you do not need to love, you need to get over yourself.  However, if you fall in love with someone who is also your friend, and you love them for who they really are, regardless of who you wanted them to be… you have found one of God’s greatest gifts to mankind.

So Malachai decided that Axe Cop would marry the Water Queen.  We had established that the Water Queen and Axe Cop had some history as friends in President of the World.  I had modeled the Water Queen after my (then) fiance’, assuming it was a cameo role.  Woman characters never last in the Axe Cop universe.  So I thought it would be cute to model her after the love of my life, since she was all I could think about while drawing that book anyway.  Malachai’s reason to make the Water Queen Axe Cop’s wife?  Because Jessica is the Water Queen, and I am Axe Cop.  It is true, often when we play together, Malachai makes me Axe Cop.  That is one reason he stays so consistent.  That first day we “played Axe Cop” together, before the comic even existed, he said I could be Axe Cop and he would be Flute Cop.  That is why Flute Cop so quickly turned into the awesome Dinosaur Soldier.

So the wedding campaign, I have to admit, struggled. It was not like hitting a jackpot.  It was a lot of work, and it was not a huge turnout as far as support and sales… but honestly, it was the perfect amount.  It was not overwhelming.  It was a lot to handle, but not too much.  The money it brought in was basically perfect.  Actually, it was about $5,000 short.  Then, literally on the day that final $5000 payment was due to finalize the wedding venue, another royalty check arrived (no others had arrived since the last one) and covered it almost to the exact dollar.

Having paid off our wedding completely, all the money we were given as gifts from friends and family went to our honeymoon, and that was covered too.  We came home with a little bit of money in the bank to get things started.  Some other amazing things had happened.  One of the things I really wanted to do for my wife was help her cover some of her debts.  A friend from church covered one of her biggest debts as a wedding gift.  Through various means, we covered other debts.  I had worried that going into marriage we would need years to pay off the debts we had between us, and by combining our incomes (my wife is a very hard working hospice nurse and mother) we were able to get almost completely out of debt within the first four months.  Credit cards, student loans, cars, and other fees… all paid off.

So I just want to send a HUGE thanks to the people on this list because you really played a part in helping me accomplish a big dream.  Not just my wedding, but my goal to give a gift to my wife that was really meaningful and indicative of the husband I wanted to show her I was determined to be.  Jessica has deserved for a long time to know that she is truly adored and treasured, and you guys helped me make that very clear to her.  I have never seen her smile like I saw her smile on our wedding day.  There were many happy tears shed all day long.

Now, in marriage, another amazing development.  Another personal goal was to make her job optional.  A couple months into marriage I got another job- a really good job – working for Dreamworks.  I am now writing Veggie Tales and this income pretty much covers what she was bringing in.  For now, we are killing off bills (ugh, taxes) and saving.  Whatever happens… I can’t believe how far we have come in such a short period of time.  I thank God, I thank everyone who supports my work, and I really do want to make sure the people on this list feel thanked.

Side note on the list… if you contributed, or ordered something, and your name is not on this list and you never received anything in the mail, CONTACT ME!  Just click “contact” up in the menu.  We need to make it right.  I did find that a few of the orders did glitch and somehow I got the money, but did not receive the order. I will do what I can to make it right if this happened to you.

Also, if you paid to be in the wedding photo album, it is going to be in the published version.  Axe Cop Vol. 5: Axe Cop Gets Married and Other Stories.

I want to mention that if you download the FOX ADHD iPhone App, you can see all 6 episodes that exist AND ONE NEW ONE.  The new one, When Night Creatures Attack, is really fun.  It is based on the Halloween special we did a couple years ago, as well as one of our  Ask Axe Cops about the Sun Thieves.

Also, check out this leaked preview for the new episodes…

What else?  I will be at Comikaze Expo in Los Angeles this weekend!  I apologize for previously saying it is in Anaheim.  DOH.

Thanks for reading, and thanks for supporting my work!