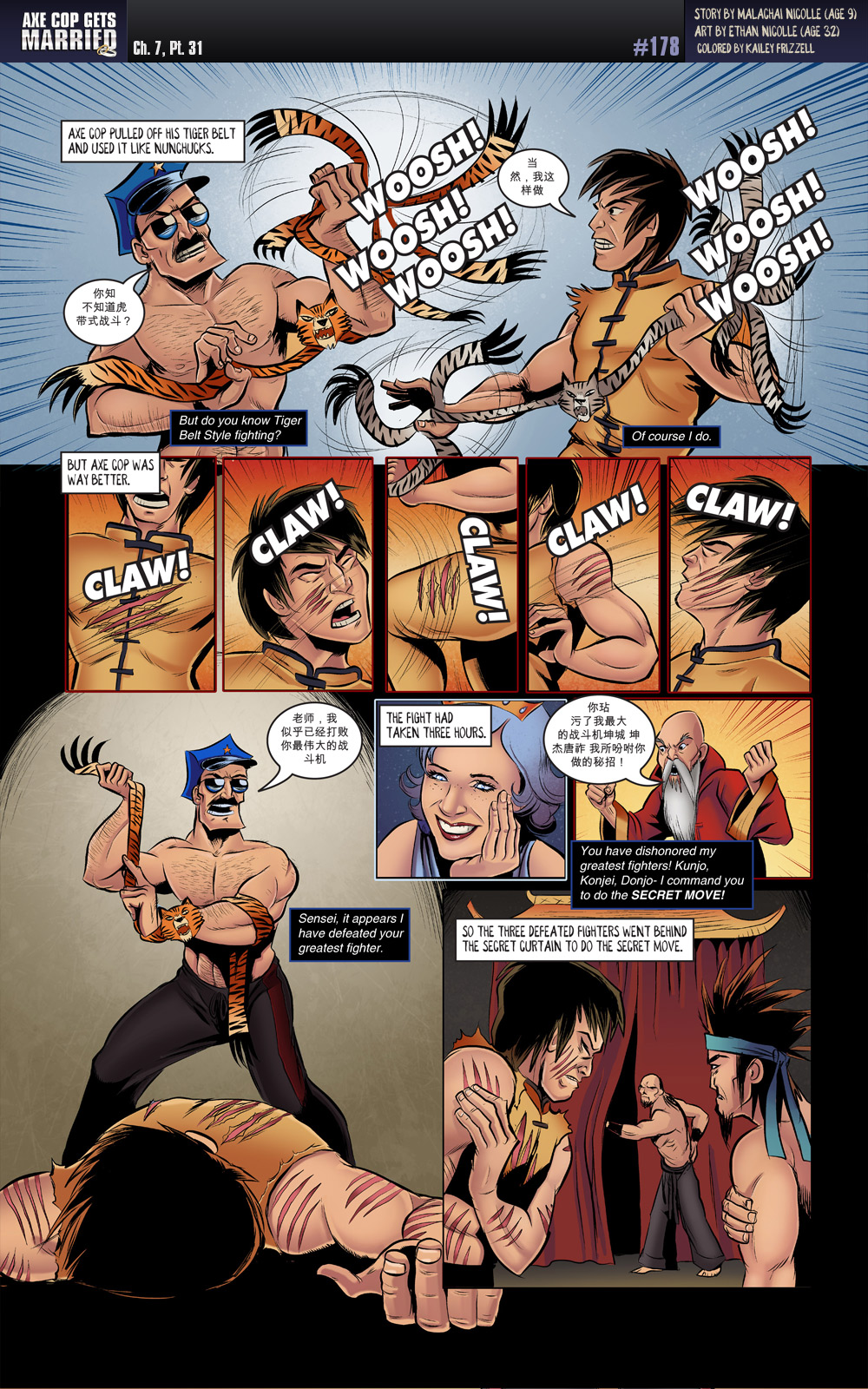 It’s so nice to be back, and to have pages to post.  One of my favorite scenes in the history of Axe Cop continues.  Sometimes in an Axe Cop story we fly from scene to scene, but every once in a while it works better to follow the action from punch to kick to punch, and that just felt right in this scene.  I love the idea of a live action Axe Cop martial arts film.  Some day just maybe it will happen… after seeing Axe Cop come to FOX, airing right after Family Guy, truly anything can happen it seems.

Some interesting videos have been released.  Here is an interview with Axe Cop on USA Today.  This interview was actually scripted off of a recorded phone call between Malachai and me.  A video featuring Nick Offerman and me was posted on E! about voicing Axe Cop.  There were also a couple of other videos on TV Guide interviewing Offerman and Ken Marino (Flute Cop) as well as Matt and Dave (writers on the show) and Nick Weidenfeld (the head of ADHD).  This is all to lead up to the true premier of Axe Cop and FOX ADHD this Saturday night at 11:00 pm (pacific time).  The epsiode will be called “Zombie Island in Space” and it’s nothing short of epic.  This episode uses  the “Ultimate Battle” story line as source material, so review that if you want to do your homework.  Zombie Island in Space is its own story though, so don’t get all anal about where the two are different.  To fit the 40 page Ultimate Battle storyline into 11 minutes would not do it justice.  We decided the best thing to do would be to extract multiple stories from it… so this episode takes the Dr. Doo/zombie portions of the story and saves the Baby Man, Lobster Man and other elements for later.

I’d also like to remind you that I do another web comic called Bearmageddon.  It is not for kids, but it is a horror/action/comedy and those who give it a try seem to really enjoy it.

Lastly, if you ordered anything from me for the Wedding campaign, have no fear.  I am in the midst of order fulfillment now that Comic Con is behind me.  I’m going to try to get all that stuff mailed out in the next couple of weeks.